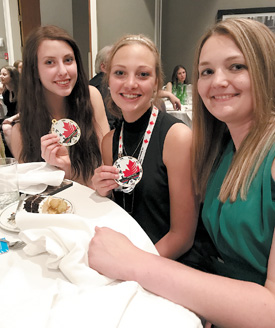 Grace Holowiski was golden in each of her events in sparring, specialty breaking and power breaking.

For her efforts, Holowiski was awarded Top Junior Female Athlete and was named to the Canadian National Team.

Holowiski’s coach Brandi Miyanaga was also named as assistant coach to the Canadian National Team and will wear the Maple Leaf.

“Both athletes have been training hard for this event for two years. They have been doing the tournament scene, going to special trainings and doing private training to prepare for this event,” said Miyanaga.

“The next four months will be fairly busy in preparation for the Worlds. We will have to fly out east for some training as well as attend some seminars to prepare,” said Miyanaga. “The World championships in ITF Taekwon-Do is the highest level of competition for us. It is an amazing opportunity for our athletes to go and represent Canada.”