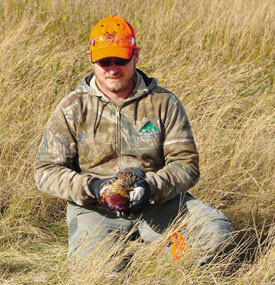 Hunting pheasants is serious business in the Municipal District of Taber, even if you aren’t the one hunting them.

During a recent M.D. of Taber annual general meeting, the topic turned to the Taber Pheasant Festival as Coun. Tom Machacek gave his report.

Last year, about 750 hunters descended upon the Municipal District of Taber for a week of pheasant hunting and activities ranging from dog demonstrations to a culinary event.

There were 40 sites to hunt from that were filled everyday with teams of eight hunters, and 5,000 pheasants are brought in for the event.

This will be the seventh year of the festival, but Machacek, who sits on the Pheasant Festival committee, says he believes no one in the room has been able to participate.

“I’m thinking no one in this room participates in the festival as an actual hunter or shooter,” said Machacek. “That’s one of the challenges we have, because the way the festival is set up is it’s on a draw system, and like the other hunting draws in the provinces, is it happens in May or June, and you apply for it, and anyone can apply for it in Canada or the U.S., and so it becomes a lottery system draw, and it becomes really tough for locals to become part of this.”

The Alberta Conservation Society organizes and runs the festival, at a loss to themselves.

As they are funded through the province, by way of receiving a percentage of the hunting license fee, they do not want to have paid hunting.

While this means there is no charge to participate in the festival — other then the cost of a hunting licence and draw certificates — it also means you are competing for what becomes a very limited spot.

“The reason no locals participate, is just because not too many get drawn,” said Machacek.
“The reason I bring all this stuff up is because, ‘Then why do you do it?’. Well, it brings 700 people that won’t normally come to our community, it brings them here. Our challenge is to basically lighten their wallets while they’re here.”

Machacek highlighted the different events the committee has been trying out throughout the week of the festival, such as the Wednesday night scotch tasting.

Last year, he said the Town of Taber stepped up their participation, hosting a breakfast on the first day.

One member of the audience asked where the pheasants came from, as the Hays 4-H club has a pheasant project it’s members can take part in.

Council was quick to assure that no, they did not get the pheasant used in the festival from the 4-H clubs.

Although in most cases, shopping local is better, getting the pheasants from further away ensures that no tears are shed over Pheasant Penny getting shot at.

“The birds we use at the Pheasant Festival come from Wisconsin,” said Machacek. “The 4-H clubs, we’ve been working with them — we highlight them at the banquet on Thursday — and we’ve been selling a couple of their birds and giving the money back to them. But we’ve been profiling the 4-H clubs and the young people that raise the birds and release them, but we do not hunt any of those birds. All the birds we hunt come in.”

Although the company they get the birds from, Macfarlane Pheasants Inc., is thinking about potentially setting up a facility in the M.D., they are looking for a long-term partnership to help run the facility, which would be located on 40-acres of land with a house and a building on it. Director of Planning and Infrastructure for the M.D., Jack Dunsmore, added they were last looking northeast of Vauxhall.

Macfarlane is worried about getting the grown birds through the border and avian flu, Machacek reported, and believes it will be easier to send them by mail in the spring time, raise them in the summer and release them in the fall.