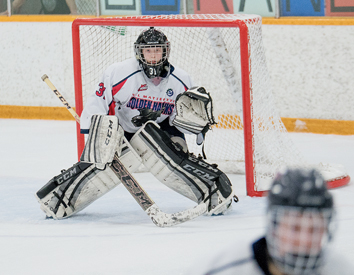 Life may be like a box of chocolates like the iconic movie Forrest Gump states, but so too was the 2017 WHL Bantam Draft for Taberite and goalie Brayden Peters — you never know what you’re gonna get.

There was plenty of buzz around the ‘AAA’ netminder for the Val Matteotti Golden Hawks that he would go at some part of the draft.

“Clubs come watch you at games and if they are interested in you, they will give you a questionnaire to fill out,” said Peters of time leading up to the WHL bantam draft in which the Taber native had several clubs showing interest. “I heard from Tri-City (Americans), Everett (Silvertips), Victoria (Royals), Red Deer (Rebels) and Brandon (Wheat Kings).”

Strangely enough Peters did not hear from the Calgary Hitmen, who eventually would draft Peters in the fifth round of the 2017 WHL Bantam Draft, 95th overall and the first goaltender the Hitmen would take. Perhaps due to the proximity of the two hockey markets which aided the Hitmen in their scouting in the draft, however the decision was formulated, Peters is happy to try and crack a WHL squad.

“It’s exciting to know I have a chance to play such high level hockey, and playing somewhat close to home, having friends and family watch me,” said Peters.

Peters’ draft selection was a well-earned one, as the Golden Hawks finished first in the Alberta Major Bantam Hockey League, with the fourth-best goals-against average at 1.98 and an overall 13-2-2 record between the pipes to go with a .920 save percentage.

Peters ramped up his game in the playoffs, eventually falling to the Fort Saskatchewan Rangers in Game 5 of the best-of-five AMBHL championship.

Down 2-0 in the series where the Taber native only surrendered five goals in the two contests, Peters helped will the Golden Hawks to a Game 5 with a 7-2 win in Game 3 and an OT win in Game 4 where Peters made 37 saves. Peters was top goalie in the playoffs with a 5-2 record, .939 save percentage and 2.00 GAA, even outshining his Fort Saskatchewan counterpart between the pipes in Sebastian Cossa, who went in the second round of the 2017 WHL Bantam Draft, 36th overall to the Edmonton Oil Kings.

“Normally, I’m a stay-at-home goalie where if I have an opportunity to play the puck to make the first play, I will,” said Peters, who admires Montreal Canadiens netminder Carey Price as his favourite NHL player. “I’m a bit of a hybrid goalie (both stand up and butterfly), I do both, it’s not one style or the other.”

However Peters’ hockey career progresses in the near future for the young teenager, the Taber native is going to keep a clear mind and focus on the task at hand to not let any opportunity slip past him, much like the very few pucks that have made their way past him this past ‘AAA’ bantam hockey season.

“I’m just going to do the best I can to make it happen and give myself the best chance to make it into the WHL.”