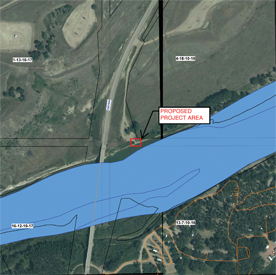 The Municipal District of Taber will be unveiling its new boat launch this summer.

Set to be completed this August, the boat launch will be the first one the M.D. has in the Oldman River.

The M.D. had saw a need for a boat launch along the river after receiving numerous inquires from their ratepayers concerning it. Concerns over improper launches along the river and damage caused to the river area contributed to the need. Along with recreation purposes, the launch will also be used for emergency access to the river, and oil and gas maintenance for crossing pipelines.

The launch will be going in on the north side of the river, directly across from the M.D. park just east of the McClaine Bridge on Highway 864, a mile north of Taber. There is existing access to it from Alberta Transportation, along with parking spaces for ten vehicles with trailers. However, some work has to be done to make it usable.

“People have been using (that spot) as a boat launch for a number of years, but with the flooding that’s occurred, particularly in 2013, now it’s a straight up and down bank of about four feet,” said Brian Peers, director of municipal lands and leases for the M.D. “The reason we haven’t constructed it to this point is through flood mitigation work through the province. On the McClaine Bridge itself, on the abutments, there was some erosion that happened in the 2013 flooding, so we wanted to have that completed by the province prior to us going in to do the boat launch — we weren’t sure how that would affect the flow of the water.”

The repair work also pushed back the timeline for constructing the boat launch, which was originally set to be competed in 2015. They had received their Water Act approval, but flood mitigation work postponed the building of the launch and after a year, the approval expired and they had to reapply. Flood mitigation work was completed last fall, and a new completion date for spring 2017 was set, but that also got pushed back, setting a new completion date of August 2017.

Although the main reason for the new delay was they were waiting on their Water Act approval — and on May 1, the M.D. had posted online that they received the approval for the launch — they have to be mindful of water flows so they do the least damage possible to the river, and they also entered into a window of restricted activity for construction on the water, due to fish spawning season, which goes from mid-April to the end of July.

“We’re within that window now; we’ve missed that window to construct,” said Peers. “That pushes us back to beyond July 31, where it is outside of that restricted period again. Hopefully everything will line up with our Water Act approval and our crews.”

In addition to getting a Water Act approval from Alberta Environment and Parks, the M.D. has also had to get permission from Alberta Transportation to use the access and approach off the highway, complete First Nations consultations, go through the Department of Fisheries and Oceans and get Canada Transportation Navigable Water approval. As soon as August hits they can start construction.

The M.D. had also applied for and received a grant from the Alberta Conservation Association for the precast concrete boat launch pads, which are currently on location.

“There’s a really good sports fishery in the river, and to access it, people would launch their boats here and go as far down as the Bow River converges, to make the South Saskatchewan there, too, of the eastern portion of the M.D., or from there go upstream,” said Peers. “This is a central location there for the M.D. on the Oldman River.”