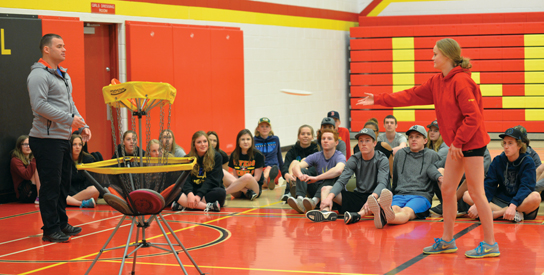 Although technology can be a good thing, like many things, you can have too much of it.

That was the message Rob McLeod, six-time Guinness World Record holder and frisbee ambassador, was hoping to spread to the students of W.R. Myers High School. With 10 World Championships under his belt and holding the Canadian Distance Record for throwing a flying disc a distance of 712 feet, ‘Frisbee Rob’ touched upon digital citizenship, access and etiquette before giving a frisbee throwing and catching lesson.

“I’ll start off by saying I’m not anti-technology, I love technology, I’ve done a lot with technology. I’ve been working in social media and online marketing for about 16 years, so I’ve been online for quite a long time,” said McLeod. “I love technology, but it’s about how you spend your time and what you do with it.”

McLeod began playing frisbee when he was in school, using it as a form of escape from the daily grind of university life. Having played sports and was active throughout high school, he found in university, it was tough to play sports, but he eventually fell into playing frisbee, or as he puts it, “frisbee kind of found me”. He had brought a frisbee on a whim one day, and the sport has stuck with him ever since.

Bringing up the popular Pixar film Wall-E, McLeod is worried that we end up like the humans in that film: confined to a chair and watching a screen all day. While technology has made life easier and in many cases better, it doesn’t mean it should be an excuse for laziness.

He showed a brief video talking about old rotary phones — with a manual turn-dial and no answering machine — to today’s hand-held smart phones — which turn into computers at a tap of the screen. McLeod said he had a rotary phone when he was 10 years old, and at that time, had at least six phone numbers memorized in case he needed to make a call. When he asked the Myers students, however, they only had one phone number memorized — their own.

“I’m not saying that it’s better or worse, it’s different. For some things it is worse, and a lot of it is for you to figure out on your own, what makes sense.”

Unfortunately, with technology changing so quickly lately, it seems like every time you buy a new phone, you need a new charger. Additionally, McLeod also stressed that everyone should be able to access the same services online, whether it is by a library computer or your own personal tablet, as many areas of daily life require you to have that access.

“Not everyone is going to have a phone, a T.V., a laptop,” said McLeod. “That’s why the library has computers, that’s why your school has computers. You can get by without technology.”

There are many ways one could run into trouble online. Although online shopping is convenient, and one can get a deal on websites such as Amazon and Ebay, he used the example of an auction for a box, which got bids of up to $15,000 before the auction was pulled from the site.

And it didn’t even contain a console or t.v. or anything, it was literally for just the box, with the auction posting even saying in the description that it was for just the empty box.
McLeod questioned how many people put up just the boxes online, with people buying them thinking they’re getting a deal on what is supposedly inside.

McLeod turned his attention to social media, using the example of someone who had tweeted that she was going to Africa and hoped she didn’t get AIDS, and she was just kidding since she’s white. After she had tweeted that, got onto her plane, and by the time she had landed 12 hours later, she had been fired from her job.

“This was screen-shotted multiple, multiple times, so even if she tried to delete it, it would not be gone… Things you post online will be there forever, so think about what you say.”

McLeod told the class that chances are, at least one of them will spend 10,000 hours on video games by the time they turn 21 years old. Citing the example of popular singer/song writer Taylor Swift, McLeod pointed out that if she played on an app all day instead of writing songs, she wouldn’t be the success she is today.

“Imagine if you have a good voice but not any songs? Not very helpful,” said McLeod. “If we want to get good at something, whether it’s for health reasons or our own personal satisfaction, we just (need to unplug). And there’s more parents, they’re more distracted than their kids are on their devices. So that’s my main motivation, is to inspire them to want to achieve something greater than just sitting, watching t.v. or playing video games.”

Youtube videos were also something to be wary of, as their creators make money off of them depending on how many views they get, with people making their living off of them. McLeod singled out prank videos, saying they were faked for the explicit purpose to get views so the creator can make money.

“Every app or website or video game or whatever, they’re making money off that, so they’re going to spend money to make money, so they’re going to figure out every single way they can to get kids to spend more time watching movies and television. So it’s a battle against that, so I’m trying to get them (the kids) to make the decisions (on their own).”

He challenged the students to do his one-day challenge, where they would go one day sans technology. That would mean no cell phones, no tablets, no Internet and no t.v., just completely unplugging for one day. After completing the challenge, he told them to contact him and he would send them a prize.

“It’s just to teach you control, you don’t need to do it all the time. Because there are now kids going away to university, once they’re out of their parents’ house, they drop out of school, because they’re staying up to four in the morning, they’re watching t.v. shows, they’re playing video games,” said McLeod. “It’s getting to the point those games want to keep you on. These apps, these websites wan to keep you on as long as possible. Once you buy a frisbee from somebody, they’re not charging an hour; it’s like apples and oranges and fruits and vegetables.”