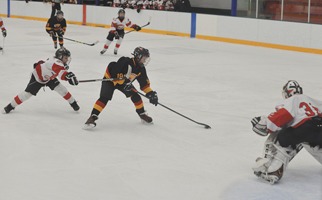 At their April 10 regular meeting, town council voted 6-1 to approve the Large Ice Surface Lighting Project, and awarded the tender to D.A. Electric for $63,410, exclusive of GST. Coun. Joe Strojwas opposed the motion.

“The Energy Conservation Committee has done a great amount of research into the energy that is used in our buildings, and it was found that the community centre as a whole takes up a majority of our energy usage,” said communications coordinator Meghan Brennan. “That might not seem like a lot, but when you take into account the amount that it takes to maintain these current lights that are way past their lifespan now, the costs are gigantic.”

By replacing the lights with specified LEDs, it is estimated the town could reduce their costs to $4691.11 per year.

The committee took into consideration a great deal of criteria in order to decide on a specific type of light that would be suitable for the large ice surface area, including average foot candles, the dark/bright spots the lighting might result in on the ice surface, the cost savings for both energy and maintenance, and the need for current lighting to be replaced in the Taber Arena. With the assistance of a consultant who specializes in lighting, the committee eventually decided on Lumingen SLB-HB-0240 LED lights.

Lumingen lights have been designed for and used in arenas in Western Canada, such as the Cenovus Arena in Medicine Hat, and have been proven to be able to take a hit from a puck and survive in the conditions of an ice arena. According to the committee, their average light intensity across the whole ice surface is fairly even, so there should not be glaring bright spots or dark spots as a result.

Public complaints have been received in the past regarding a lack of proper illumination for the ice surface, and it was asserted that the LED replacements would increase average intensity from 27 foot candles to 67, greatly improving brightness while promoting energy efficiency. The Lumingen lights come with a lifespan of 162,000 hours.

“Is it going to be brighter? When we did our research, we found that a lot of people complained about the light level on the large ice surface, that it was very dark. So is there a way to be energy efficient while still providing the public with what they wanted? The answer is yes, and it’s with this light,” said Brennan.

Town staff currently spend approximately 2-3 hours per week maintaining the lights on the large ice surface. Each time a light has to be replaced, two staff members are required to do the work. It was noted that the current lighting is in severe need of replacement, with staff reporting that the lights are literally “falling apart” — past their lifespan, rusting and hard to maintain, and periodically shedding reflective material on to the ice surface.

Excluding costs of maintenance, it is estimated the Lumingen lights will pay for themselves in 11.3 years. When including these costs, the payback decreases drastically to only four years. In addition, the provincial government has released funding for municipalities that are undergoing lighting retrofits, which could potentially allow the town to access a rebate per light to help mitigate cost of the project.

“Those extra hours that have to be spent every week, if you add that package up, it pays for itself in four or five years,” said former Mayor Henk DeVlieger. “I think that’s the really good investment.”

Tenders received for the project were as follows: Emerge Electrical ($78,000); Armax Electric Ltd. ($82,600); Can Traffic Services Ltd. ($82,930); D.A. Electric Ltd. ($63,410); Corona Electric Ltd. ($65,498); Coleman Electric ($77,600), and Apex Power and Automation Ltd. ($68,500). Other companies provided quotes for alternative lighting options other than Lumingen LEDs, but are not included for comparative purposes. Installation (50 lights) is expected to take roughly 10 weeks. According to administration, there is currently over $300,000 set aside by the town for energy conservation projects.

Funded exclusively through the town’s franchise fee revenues, the energy conservation reserve was established in 2013, where 7.5 per cent of franchise fee revenue is directed into a fund to support energy conservation projects. Taber is one of a handful of Alberta communities currently charging the maximum-allowable rate of 20 per cent as a franchise fee. Across the province, franchise fees have increasingly been criticized as a “hidden tax” by utility consumers, a “tax” which raises revenue for municipalities through charges to a resident’s utility bills and not through their property taxes.

Out of a list of 137 communities in 2014, only Blackfalds, Bon Accord, Breton, Calmar, High River, Morinville, Provost, Stony Plain, Thorsby and Vulcan charged a rate of franchise fee of 20 per cent. A majority of communities included on the list only charge franchise fee rates of between zero and 10 per cent. Franchise fees provide a significant amount of revenue to the town, with franchise fee revenues for 2016 for FortisAlberta representing $1,194,550 and ATCO at $631,607.

The Alberta Utilities Commission (AUC) has established maximum percentages for franchise fees at 20 per cent, and historically the town has maintained its percentage rates at that maximum.
Five administrative staff members currently sit on the Energy Conservation Committee, and would be responsible for tendering and ensuring the implementation of any projects. The committee is made up of Meghan Brennan (communications and projects co-ordinator), Trent Smith (recreation manager), Ramin Lahiji (engineering manager), Bill Brezovski (master electrician), and Jason Wilms (facility maintenance coordinator).