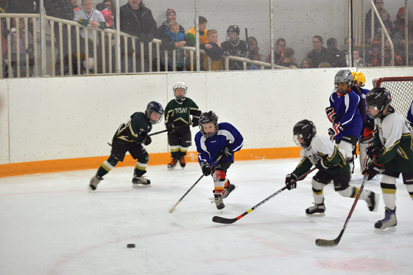 The Town of Taber has allocated funds to study the best options involving re-developing or replacing the Small Ice Arena inside the Taber Community Centre complex.

At their Feb. 27 regular meeting, town council voted unanimously to allocate $19,000 (plus GST) from capital reserves for the purpose of having MPE Engineering complete an investigative study regarding options for future enhancement or development of the Small Ice Arena. Coun. Joe Strojwas was absent.

According to administration, due to increased concerns with the condition of the Small Ice Arena, town council had previously authorized the Taber Recreation Board to create a committee to look at all aspects of constructing a new ice surface, and future use of the small ice facility.

“I’m just hoping that the committee isn’t focusing on only building a new rink, that they really focus as much on replacing the ice we have now, as gung ho about a new ice surface,” said Coun. Jack Brewin. “As long as we make sure we give a good solid look at fixing what we have instead of building a new one at this time, is something I have concerns with.”

The rec board discussed the formation of a committee, as well as the next steps for the project, and passed a resolution earlier this year recommending, “Council allocate funds to allow administration to proceed with technical requirements for the addition of a full-size ice surface, or a stand alone full ice surface, and continue to advertise for people to sit on the committee.”

“That’s exactly why we’d like this report done,” said CAO Cory Armfelt. “It could be that the price point of fixing the old, or replacing with new, is very similarly priced. But we don’t know that, and we’re asking for a recommendation to come up with this committee. They made a recommendation without any knowledge of the financial impact of what they’re actually recommending. It could change the recommendation, so that’s exactly why we’d like to task them with this responsibility, so they have the most information they could have.”

Following the rec board meeting, administration followed up with MPE Engineering and requested costing for a consultant investigation for the Small Ice Arena. Administration has asked for feedback on four options, including direct replacement, expansion of the current building north to allow for regulation-size ice, expansion to regulation size within the current Taber Curling Rink area, or a new separate rink connected by a corridor.

“The committee could get together, have all these meetings, go visit all kinds of arenas, and just be spinning their wheels,” said Coun. Randy Sparks. “That’s why it’s nice to have MPE (Engineering) come on board and come back with some facts and figures that this committee can look at, and then make a decision. Because a lot of work can go into this, and maybe it doesn’t work out. It’s $19,000, I understand that, but I think it’s going to be money well spent to help us, and the committee, come to a decision on what really needs to be done with this ice surface.”

Re-developing the Small Ice Arena was identified in the town’s Recreation Master Plan, and was ranked ninth out of 16 facilities to be upgraded or re-developed. According to recreation director Aline Holmen, MPE Engineering could initiate its investigation of the facility this week.

“No matter what we do, it’s going to be a fair amount of investment we have to do, even if we replaced the system that’s there now, compared to building new,” said Mayor Henk DeVlieger. “I think it’s worthwhile spending that money to make the best decision possible.”