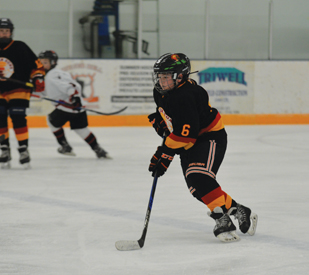 The team started at home on Saturday afternoon as the Suns dropped an 8-5 decision to Bow Valley Timberwolves (14-11-4) at the Taber Arena, after not being able to hang onto a 3-0 lead in the first period with three power-play goals.

Nathan Verloop had the hat trick and Rylen Roersma, Fraser and Heins each had two tallies apiece. Van Vaerenbergh and Ryan Holm had singles. Roersma and VandenElzen both had two assists apiece. Verloop, Van Vaerenbergh, McCulloch and Fraser also drew assists. Scout Sidam earned the win in net, facing 29 shots on goal for the Golden Suns.

Taber peewee “AA” Golden Suns travel to Olds on Saturday to battle the Grizzlys before returning home on Sunday to take on Foothills Bisons at 1 p.m. at the Taber Arena.

BANTAM: Taber bantam “AA” Golden Suns (21-9-2) emerged from a grueling weekend of SCAHL play with a 2-1 record and a share of top spot in the south division with Okotoks Oilers.

The team played a home-and-home with the Lethbridge Hurricanes (18-9-4), starting off with a 5-2 win on the road on Friday.

Marek Andres faced 27 shots on net to earn the win in goal for the Golden Suns.

The Hurricanes returned the favour in Taber’s home barn, as the Golden Suns fell 5-3 at the Taber Arena on Saturday afternoon.

Andres faced 33 shots on goal to take the loss in net.

Taber bantam “AA” Golden Suns finished off strong with a 6-2 win over Wheatland Warriors (9-17-4) on the road on Sunday.

Blake Vaselenak faced 33 shots on goal to take the win in net for the Golden Suns.

MIDGET: Taber midget “AA” Golden Suns (11-13-7) dropped both its games over the weekend.

The first was a tight 3-2 loss to Okotoks Oilers Green (11-17-4) at the Taber Arena on Saturday, as the Golden Suns were burned by a hot goalie in Kyle Schneider who faced 55 shots on goal.

Broc Merkl faced 29 shots on goal to take the loss in net for the Golden Suns.

The team proceed to face another solid goaltending performance in a 6-0 blanking at the hands of NWCAA Stamps (10-2-3) on Sunday on the road.

Theo Paskuski faced 39 shots on net to take the loss in goal.

Taber midget “AA” Golden Suns host Okotoks Oilers Black at the Taber Arena at 8:30 p.m. on Friday. The team then travels on Sunday to take on Central Alberta Selects.