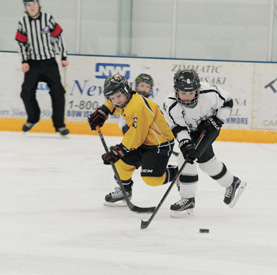 EYE ON THE PRIZE: Konnor Wiebe of the Taber novice Oil Kings battles for the puck against Duchess in CMHA play at the Taber Arena on Saturday morning. TIMES PHOTO BY GREG PRICE

Taber novice Oil Kings split a pair of high-scoring games in CMHA play on the weekend.

The Oil Kings skated to a 13-11 win over Duchess Storm at the Taber Arena on Saturday morning.

The team proceeded to drop a 15-12 decision to Coaldale on the road on Sunday.

MIDGET: Taber midget Oil Kings doubled up Redcliff 4-2 on Saturday at the Taber Arena in the team’s last regular-season home game of the year.

Matthew Kerkhoff, Dylan Jones and Dallas Bodnar scored goals for the Oil Kings with goalie Trey Ross notching an empty netter to put the game away.

Kayden Kress led the way with five goals and an assist for the victors. Damian Beswick had a hat trick. Tage Jensen, Jaxson Coutts and Tristen Egeland each had one goal and two assists. Blake Rabusic had three helpers and Tanner Fletcher had two assists. Tyson Church drew a single assist.

Replying for initiation 2 Oil Kings were Lincoln Wiebe with a hat trick and Jenner Workman, Dallin Langhofer and Charley Fletcher with singles.