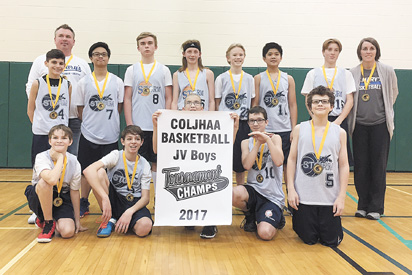 LEAGUE ELITE: The Storm boys basketball program has made huge strides on its way to the championship. TIMES PHOTO SUBMITTED BY JEFF BELL

Like the mighty Phoenix, the St. Mary’s Celtics Storm JV boys basketball team has risen from the ashes of its humble beginnings to take its league championship this past week in a tight 42-38 win over Coaldale Christian.

“We both had really good low-post players that did really well. Our guards did a really good job of seeing the floor and connecting the passes in our final tournament,” said Jeff Bell, head coach of the St. Mary’s Storm JV boys basketball team.

The two teams foreshadowed how tight the league championship game would be with Coaldale Christian beating the Storm a couple of weeks ago by three points in overtime.

“We both sort of dominated the league where they finished first and we finished second in the league in the standings,” said Bell.

Earlier, the Storm took second place in its home tournament.

With a roster comprised of Grade 7 and 8s, four of the Grade 8s floated up to the St. Mary’s Storm varsity team as well with rosters of 18 players total between the two programs. The Storm has been growing in strength to greater prominence.

“The interesting thing is, last year, this same group of kids finished in last in the JV league,” said Bell. “This year, the same group of kids finished first. It is a unique, good group of boys. Coaching them in Grade 6, 7 and 8 now, their development from Grade 6 has been just amazing. It’s neat seeing that progression where from Grade 6 they didn’t win anything to winning the league this year.”