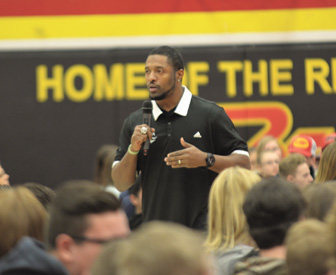 SPEAKING UP: CFL veteran and two-time Grey Cup champion Keon Raymond speaks to a group of students about different kinds of violence. Raymond was at W.R. Myers High School on Monday, Feb 13, as a facilitator for Leading Change. TIMES PHOTO BY NIKKI JAMIESON

Violence is not always a punch in the face.

Although a bit hesitant, answers from the Myers, D.A. Ferguson and Vauxhall High students became trickling out; hitting, cat-calling, guilt-tripping and racism were just a few of the answers given.

Leading Change is an initiative put on by FCSS and ACWS to end violence towards women. Teaming up with CFL teams the Edmonton Eskimos and Calgary Stampeders, the aim is to spread the message that everyone can play a role in ending violence and open up dialogue on the issue.

“I think a lot of the kids who watch sports, with me being an athlete up here, you have a platform. And I think it’s an easier connection for the young kids to kind of associate a message, you know, with a guy who they’ve seen,” said Raymond, who has lived in a home with domestic abuse. “I was excited when they asked if I would be willing to do this and, like I said, I jumped at it. You know, knowing my personal background and the story that I had as a kid. So, whatever I can do, to share my story, to change even one kid’s life, you know, I’ve done it.”

Although not all violence occurs against women or girls, the vast majority are. According to Hickman, 67 per cent of Canadians say they know at least one woman who has experienced physical or sexual abuse, with that statistic rising to 74 per cent in Alberta. Between 2015 and 2016, over 4,500 women and 4,100 children were welcomed into shelters across Alberta. Unfortunately, over 16,000 woman and children had to be turned away.

“Women have been in the forefront of this for decades,” said Raymond. “I think for the most part, it’s us young men, I think it’s about time for fellows to step up, because women have done their job of strengthening laws, of finding funding to try to help. You’ve heard how many women and children are turned away from these shelters; close to 16,000. And that is a lot when you have the capacity to be able to house and shelter women and children like that.”

“This is a call, honestly, for young men and men and young boys, to make sure we stand up, and we have a voice, to let the ladies know that hey look; we got your back, we want to stand with you. Women are always at the forefront of this, but we want to make sure that we can stand with you ladies.”

Dating violence is most common among those aged 15-24, who make up 43 per cent of all incidents of dating violence. The reason, according to Hickman, was because people this age were dealing with new experiences and mimicking things they’ve seen.

Peer pressure, trying to get someone to sext and demanding to see someone’s phone are just some of the many forms of dating violence.

Unfortunately, there is a lot of portrayals of dating situations out there that aren’t that good. Using the example of the 1989 film ‘Say Anything’, Hickman brought up the infamous boombox scene.

“It’s a big scene; the guy is with a girl, she breaks up with him, so what does he do? It’s a little before your time, but he goes and stands outside of her window, he’s got a boombox, he’s in the rain, he’s playing their song,” said Hickman. “He shows up at her house, uninvited, unannounced.”
“It sounds like stalking to me,” said Raymond.

Raymond spoke of an experience at a gas station, where a guy was screaming at a woman, leaving no bystander unaware of the verbal abuse he was spewing. An employee that had worked at the gas station looked over at what was going on, turned around and left, apparently deciding that he didn’t want to get involved.

“I go and get out of my car and go over to them. And I’m not ever asking anybody else in this room to walk over to somebody and stop an altercation or whatever, these are the things we’re not trying to tell you to do. But, understanding how to diffuse a situation and not being a bystander, and just sitting there a going ‘Well you know what? I’m not going to say anything and hopefully it’ll be over in a few minutes’,” said Raymond, adding the situation had ended peacefully. “To see the man who worked there not to say a word… this happens every single day. Every single day, every day, all the time.”

“This is an instance of being able to step up for somebody who may not have a voice for themselves. And that’s why we want to try to give you guys some tools, to be able to put in a box so if you can see something like that, that you can always grab.”

Hickman also relayed a story of her own. Back in high school, she had, in her group of friends, a guy nicknamed Creepy Al — a title he openly embraced. All the girls in the group knew to never be alone with him. Despite being in the friend group into college, not one of the other guys came up to him and told him to knock it off.

“That didn’t happen, and how quickly, how it became normal for us to be like, ‘Yeah, he’s just Creepy Al. You know, you just don’t wear revealing clothing around him, don’ be alone around him, don’t drink around him and don’t lead him on’,” said Hickman. “All these things, all these behaviour modifications we had to do, we had to drastically change our behaviour for one person.”

It wasn’t until she started training for the program, did she realize that it wasn’t right. While more subtle then a woman being screamed at in public, if one of her guy friends had called Creepy Al out in high school, she and the rest of her female friends would have been thankful, and maybe would have actually had a healthy friendship with him.

Raymond told a final story, this one of an eight-year old kid coming home from school, seeing his parents fighting all the time, watching his dad hit, berate and degrade his mom every day. That kid was him.

“If you’re going to school and you hear that, this is what’s on your mind; is your mom going to be okay when you get home? Is she going to be alive? And what is the next thing? And you’re a young kid, and this kid didn’t know what to do at that time,” said Raymond. “This is his father, who he looks up to. And this is his first relationship, the image of marriage that he sees, at eight-years-old.

“But at the end of the story, kind of the conclusion, the mom got the courage, the built up courage, to leave an abusive husband, to leave the situation. There’s women who go through these things every single day.”

Raymond’s mom took him and his siblings to a shelter across the country. Noting the amount of women and children who had to be turned away last year, they were lucky. Now, the ten-year CFL veteran stands before the crowd of students “as a kid who understands that there is a situation, that there is a problem”.

“Sometimes it’s hard to be the odd man out, but that’s why leaders stand alone,” said Raymond. “We’re not asking you to go tackle anybody like I would, obviously. But we’re asking you to use the tools we’re equipping you guys with; use certain things, use certain ways to get out of certain situations.”

Hickman and Raymond did another Leading Change presentation at St. Mary’s High School in Taber on Monday, Feb. 13, and in Coaldale and Picture Butte on Tuesday, Feb. 14. Raymond will be joined by Tuval Dinner Nafshi, Leading Change community developer, for school presentations on Wednesday, Feb. 5 in Raymond and Cardston and on Thursday, Feb. 16 in Coalhurst and Nobleford.