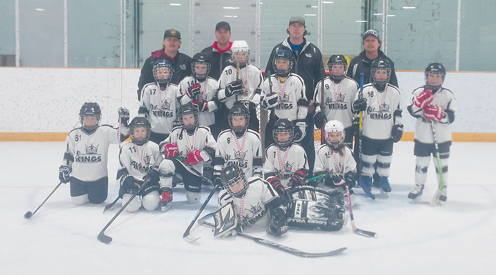 The team’s last game of the tournament was a 13-2 win over Chestermere Lakers.

Stronge had a hat trick and Raiden Koizumi and Avery Remfert had two goals apiece. Umbach, Ruggles, Wiebe and Ryler Kiss had singles.

The team did play Chestermere Lakers earlier in the tournament in an 8-2 win.

Stronge had a hat trick and Wiebe tallied twice. Umbach, Miller and Duell had singles.

Stronge had a hat trick and Wiebe, Remfert, Ruggles, Koizumi, Umbach and Roman Capner had singles.

In regular-season play, the Oil Kings dropped a 14-5 decision to Irvine Bulldogs in Vauxhall on Sunday.

Stronge scored four goals and Wiebe had a single.

The Oil Kings were then edged 6-5 by Picture Butte on Sunday.

ATOM: Taber Oil Kings dropped a 25-1 decision on Friday night to the Raymond ‘A’ team with goalie Shaylee DeBona under siege with 89 shots on net.
Wyler Langhofer scored with an assist from Jaxson Coutts in the loss.

The team followed up with a 5-2 loss to Lethbridge Scorpions on Saturday.

Tage Jensen scored both Oil Kings goals, with Tyson Church getting an assist.