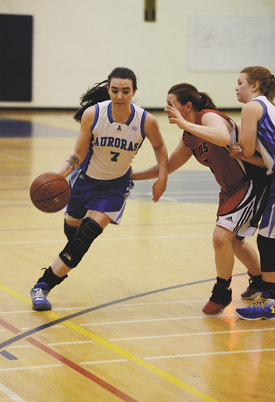 St. Mary’s Auroras girls basketball team earned the bronze medal at its home tournament, losing its only game to the eventual tournament champion.

“We had a really good tournament. I was really impressed with the weekend,” said A.J. Bergenhenengouwen, head coach of the St. Mary’s Auroras girls basketball team.

The Auroras earned the bronze medal by beating St. Michael’s from Pincher Creek, 54-40 on Saturday.

“It was a really good team effort. Everybody brought their ‘A’ game and their intensity was great the entire game,” said Bergenhenengouwen. “They kept their foot on the gas pedal the entire game and a lot of our seniors stepped up.”

“That was a great game by all,” said Bergenhenengouwen, adding the Auroras were bumped to the third-place game by falling against McCoy JV from Medicine Hat, 57-41. “It was a good battle for us and I was still happy with our effort and it was good to see it continue on to the next game.”