Bantam Suns continue to shine atop the south 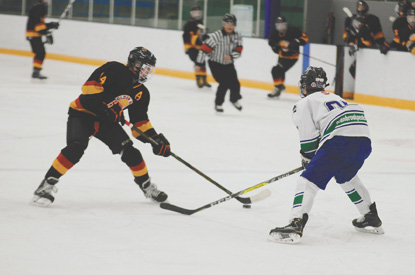 ICEMAN COMETH?: Major ice user groups (like the Taber Golden Suns) are being invited to the Taber Recreation Board’s next meeting to provide their opinions on the plight of the small ice at the Taber Arena. TIMES FILE PHOTO

Taber bantam “AA” Golden Suns (15-5-1) stayed perched atop the south division of the South Central Alberta Hockey League by opening up its New Year play with two victories. The Suns have an identical 31 points with the Okotoks Oilers to co-host the top spot in the south division, but the Suns have two games in hand.

The Golden Suns scored four unanswered goals against the Cranbrook Hornets (12-8-3) to take a 4-1 win at the Taber Arena on Friday night.

The team proceeded to win 6-3 against Airdrie Lightning (7-15-0) on the road on Saturday.

PEEWEE: Taber peewee “AA” Golden Suns (8-6-4) earned four points in the standings in South Central Alberta Hockey League play by taking a win and a tie over the weekend.

The squad started off with a 4-4 draw with Lethbridge White (10-10-3) on the road on Friday, with the power play a large determining factor with each team scoring three goals each with the man advantage.

Scout Sidam was solid in net, facing 47 shots on goal.

The team returned home on Saturday and skated to a 5-2 win over Chestermere Lakers (7-10-4) at the Taber Arena.

Peewee “AA” Golden Suns have a busy weekend of SCAHL action coming up with road games on Friday and Saturday against Chestermere Lakers and Okotoks Oilers Green respectively, before returning home on Sunday with a game against Lethbridge Hurricanes Red at 10:30 a.m. at the Taber Arena.