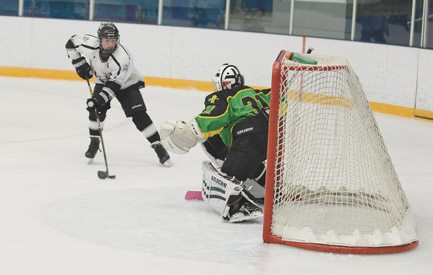 NET SEEKER: Josh Verloop of the Taber bantam Oil Kings skates in on an Okotoks Oilers netminder during CAHL league play on Sunday afternoon at the Taber Arena. TIMES PHOTO BY TREVOR BUSCH

Taber midget ‘A’ Oil Kings dropped both of its games over the weekend in minor hockey competition.

The Oil Kings fell 6-4 to Nanton on Saturday.

The Oil Kings followed up with a 3-2 loss to Okotoks on Sunday.

Leismeister and Rory Murphy scored for the Oil Kings.

Initiation 1 Oil Kings were also in action as the team beat Picture Butte 11-5 on the road on Saturday.

The team proceeded to drop a 13-9 decision to Lethbridge White Horns at home on Sunday.