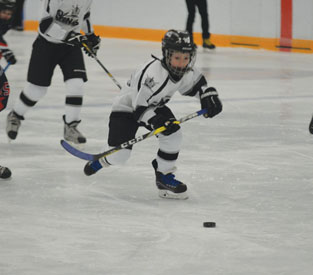 Taber novice Oil Kings were silver medalists at its home tournament this past weekend at the Taber Arena.

The Oil Kings started things off with a 13-1 win over Brooks.

Stronge had four goals and Umbach had a hat trick.

Wiebe and Lincoln Weiss both had two tallies. Avery Remfert and Ryler Kiss had singles.

Wiebe and Stronge both had hat tricks and Capner, Umbach, Weiss and Heston Hansen had singles.

INITIATION: Taber initiation Oil Kings won two out of three games it played in a tournament in Picture Butte.

The first game was an 11-2 win over Medicine Hat Ice.

The team proceeded to drop a 12-7 decision to Okotoks Flyers.

Degraw had a hat trick and Schalk and Emmett Ruggles had two tallies apiece.

The Oil Kings finished things off with a 12-7 win over Coaldale Cobras.

Degraw, Volk and Schalk all had hat tricks. Kramer scored twice and Ruggles had a single.

ATOM: Taber atom ‘A’ Oil Kings earned the silver medal at a hockey tournament in Morley this past weekend.

The team’s first game was an 8-3 win over Blackfoot Chiefs.

Chapman scored both goals with assists from Koizumi, McCulloch and Hunter Damberger.

The first game was a 5-3 in which McCulloch tallied twice and Chapman, Jensen and Tolsma had singles.

The gold-medal game was a 4-3 loss. Chapman, Span and Tolsma scored with assists from Holland and Planger.

MIDGET: Taber midget “A” Oil Kings had a busy weekend of hockey play with three games.

Friday’s game was an 8-1 loss to High River.

Clay Leismeister scored with an assist from Mitch Young.

Saturday’s contest was a 3-1 loss to Lethbridge.

The Oil Kings ended the weekend on a winning note, beating Picture Butte 9-2 on Sunday.