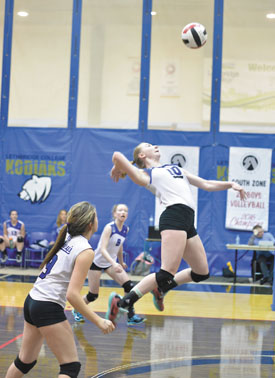 Another season has passed for the St. Mary’s Auroras girls volleyball team, where they were on the verge of a medal at 2A south zone competition late last month at Lethbridge College.

The Auroras were able to win its pool by besting Willow Creek out of Claresholm, F.P. Walshe from Fort Macleod, Raymond and Picture Butte.

It gave the Auroras a bye into the semis where they would square off against Picture Butte again, but this time coming out on the losing end to the eventual gold-medal winning squad that took home the zone banner. The Auroras then fell to Kate Andrews in the bronze-medal match in three sets.

“I am so happy and proud of all my student athletes this year. Each girl showed tremendous growth as a person and as a player which is always important. Many girls were challenged to play in positions they weren’t used to and always did their best. I can easily say that I had the happiest team in our league and zone – there was never any tears or anger or frustration if we had an outcome that wasn’t favorable,” said Cassie Mucciarone, head coach of the St. Mary’s Auroras girls volleyball team. “The girls just shook it off and moved forward. We were never short on smiles, which is something I don’t think a lot of other coaches could say. So for that I am truly thankful and blessed to have worked with such an amazing group of girls.”

The team also won the Picture Butte Royal Rumble Tournament in which Jordan Baynham and Rae Anne Vayro were selected as all-stars.

Also, the Auroras managed to improve their south zone 2A ranking from sixth to fourth after the tournament was over at Lethbridge College.

In league play, Rae Anne Vayro was selected as a second-team all star in which 35 athletes were nominated with only 15 selected as the top players in the league according to other coaches.

“She is an extremely versatile player, and played right side, power, and middle for me over the last two years. I received a lot of positive feedback from other coaches when she moved into the middle position as she was such a dominating player,” said Mucciarone. Currently she is looking into attending either Medicine Hat College or Lethbridge College for the fall and is wanting to continue playing volleyball.”

Vayro is one of five seniors who graduated from the team which also included Baynham, Jessie Braun, Kennadi Bodnar and Taylor Marchuk.

“Their energy, positivity, attitudes, and skills will be missed,” said Mucciarone.