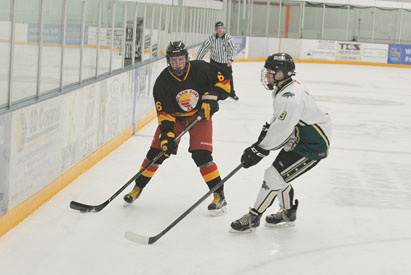 PRESSURE: Cole Jensen of the Midget “AA” Golden Suns attempts to thread the puck past an opposing defender during SCAHL play on Friday evening at the Taber Arena. TIMES PHOTO BY TREVOR BUSCH

In a battle of the top two teams in the South Division of the South Central Alberta Hockey league, the Taber bantam “AA” Golden Suns (11-4-1) split its road two-game set with the Cranbrook Hornets (9-6-3) in the tightest of margins.

The Golden Suns dropped the first game 6-5 on Friday night, surrendering the winning goal with 2:34 left to play in the third period, as the squad started its grueling road trip.

“Because it was in Cranbrook, 13 and 14 year old kids don’t have a lot of experience with riding a bus for five-and-a-half hours and then trying to stretch out and get in game mode. It’s definitely an advantage for the home team in a game like that, but Cranbrook will have to do that with us coming back later in the season,” said Cam Cleland, head coach of the Taber bantam “AA” Golden Suns.

The bantam “AA” Golden Suns managed to bounce back with an 8-7 win against the same Hornets squad on Saturday afternoon.

“On the Saturday game, we really didn’t have the attention and energy in our game with the forecheck and backcheck to get ahead and put it away. We were a couple goals down in the third period. I told the kids at that point in time that Xs and Os were not going to win the game for us. They’d be happy to get four points off us. For 20 minutes you got to go out there and be hungry and find a reason why you want to win the game,” said Cleland. “The best part of the weekend was they did that in the third period. Our forecheck turned pucks over and we scored goals. But, we were still fortunate. They pressed hard on us in the last 45 seconds where they pulled their goalie and it was 50/50 where one of those pucks easily could have gone in.”

MIDGET: Taber midget “AA” Golden Suns had a tough weekend of SCAHL play, dropping both of its games.

The first was a 9-7 decision at the hands of the CNHA Blazers at the Taber Arena on Friday night.

Broc Merkl was peppered with 46 shots on net in the loss.

The team proceeded to hit the road where they dropped a 5-3 game to Medicine Hat Hounds.

Merkl took the loss in net, facing 47 shots on goal.

Taber midget “AA” Golden Suns are on the road this weekend with a game against Okotoks Oilers Green on Saturday and a Sunday game against CRAA Gold in Calgary.

PEEWEE: Taber peewee “AA” Golden Suns return to SCAHL play this weekend after playing in a tournament in Lethbridge this past weekend. The team hosts Medicine Hat Hounds on Sunday at 1 p.m. at the Taber Arena,