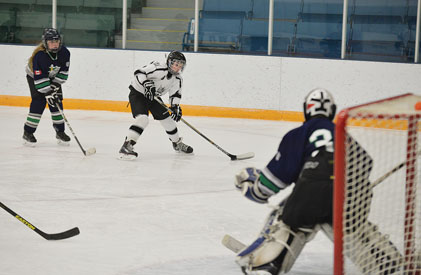 ON TARGET: Kole Reynolds of the Taber peewee Oil Kings prepares to take a shot on net during minor hockey league play at the Taber Arena on Sunday afternoon. TIMES PHOTO BY TREVOR BUSCH

Initiation 1 Oil Kings hockey team earned a 13-6 win over Lethbridge White Horns at the small ice of the Taber Arena on Saturday.

Delphin Deboer, Nathan Gensorek, and Madix Miller all had hat tricks. Burke Hyland had two tallies and Hayden Eldridge and Brodyn Sutka each had singles.

Initiation 3 Oil Kings were also victorious in its game in a 16-4 victory over Picture Butte at home on Saturday.

Degraw, Volk, Ruggles, and Kramer each had hat tricks. Schalk had two goals and Olfert and Ryder Nielsen had singles.

MIDGET: Taber midget Oil Kings skated to a 5-3 win over Lethbridge on Saturday.