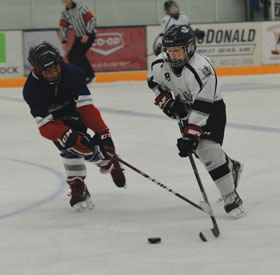 MY PUCK: Walker Skiba of the peewee Taber Oil Kings skates around a Pincher Creek player during a Saturday, Nov. 19 game at the Taber Arena. TIMES PHOTO BY NIKKI JAMIESON

The team then proceeded to drop a tight 5-4 game to Okotoks on Sunday.

NOVICE: Taber novice Oil Kings splits its pair of minor hockey games on the road on the weekend in Spud League play.

The first was a 9-7 victory over Magrath on Saturday.

Chase Stronge had four goals, with Lincoln Weiss netting the hat trick. Nixon Miller and Ayden Umbach had singles, with assists from Weiss and Stronge.

Konnor Wiebe got the win in net, facing 21 shots on goal.

The Oil Kings proceeded to drop a 13-10 decision to Irvine on Sunday.

INITIATION: Taber initiation 1 Oil Kings were victorious in both its hockey games.

The first was a 13-11 win over Lethbridge at home on the small ice on Saturday.

Sunday’s contest was a 16-6 victory over Picture Butte Blades at home.