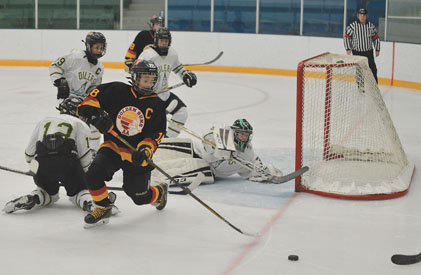 NET SCRAMBLE: Rylen Roersma of the Taber peewee “AA” Golden Suns dances with the puck around the opposing net during weekend play on Sunday afternoon at the Taber Arena. TIMES PHOTO BY TREVOR BUSCH

Taber peewee Golden Suns started off with a 6-3 loss at the hands of Okotoks Oilers Green (7-3-2) at the Taber Arena on Saturday.

The team bounced back with a 10-6 win over Okotoks Oilers Black (3-5-1) at the Taber Arena on Sunday afternoon.

Ty Fraser had four goals for the Suns and Magarrell had two goals. Roersma, Heins, Verloop and Zachery Hauck had singles.

MIDGET: Taber midget “AA” Golden Suns (5-5-2) took three out of a possible four points on the weekend in SCAHL play.

Theo Paskuski earned the win net for the Suns, facing 20 shots on goal.

The team proceeded to skate to a 2-2 draw with Medicine Hat Hounds (7-3-2) on Saturday on the road.

Kole Fujita and Chase Gedny scored for the Suns who got assists from Reed Odland, Tanner Turcato and Justin Astalos.

Brock Merkl preserved the tie in net for the Golden Suns, facing 32 shots on goal.