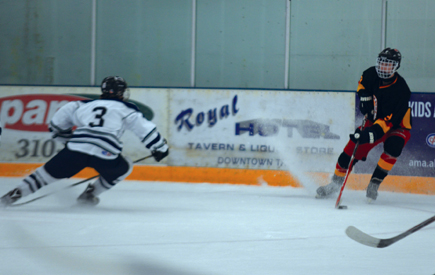 ICE ACTION: Brant Mack of the Taber Midget Golden Suns takes control of the puck during a game against the Medicine Hat Hounds on Saturday, Oct. 29, at the Taber Arena. TIMES PHOTO BY NIKKI JAMIESON

Taber midget “AA” Golden Suns (4-5-1) burned brightly in South Central Alberta Hockey, League competition on the weekend, winning both of its games, including one against one of the top teams in the South Division.

The Suns edged Medicine Hat Hounds (6-2-1) by a 5-4 score at the Taber Arena on Friday night, where special teams loomed large with four power play tallies spread among the two teams with two apiece.

“It was discipline. With midget-aged kids, it’s hard to stay disciplined, they wear their heart on their sleeve and the kids did very well,” said Geoff Oster, head coach of the Taber midget “AA” Golden Suns. “Power plays and the penalty kill is what is going to win or lose games for you at the midget level. That’s something we have just started to focus on. We got two power play goals against Foothills too.”

“Capitalizing on those power play opportunities just makes it easier for our guys when they are playing five-on-five.”

Broc Merkl earned the win in net for the Golden Suns, facing 34 shots on goal.

The team then continued its winning ways at home with a 7-2 win over Foothills Bisons (0-7-2) on Saturday at the Taber Arena.

Merkl earned the win in goal, facing 20 shots on net for the Golden Suns.

Taber midget “AA” Golden Suns are on the road this weekend with games against Cranbrook Dynamiters on Friday and Medicine Hat Hounds on Saturday.

“You think back to when you were that age at midget, it’s tough to stay disciplined. But, the kids are turning around to the style of play we are trying to put forth,” said Oster. “They are seeing the results which is the biggest thing and it’s making it easier for them to play that way.”

Kalem Haney scored the lone Suns tally with an assist from Kolby James.

Marek Andres kept the Suns in the game, facing 40 shots on goal, taking the tough-luck loss in net.

The team bounced back with a dominating 8-4 victory over Central Alberta Selects (6-2-1) on the road on Sunday.

Kolby James, J.D. Hall and D.J. Tonin each had two goals apiece for the Suns. Nolan Price and Colby Garner had singles.

Blake Vaselenak faced 33 shots on net to earn the win in goal for the Golden Suns.

Taber bantam “AA” Golden Suns do not return to league play until Nov. 12 with a home game against Airdrie Lightning at the Taber Arena at 5:30 p.m.

The Golden Suns were doubled up 6-3 against Okotoks Oilers Green (5-3-2) on the road on Saturday.

Scout Sidam faced 21 shots on goal to take the loss in net.

The squad then skated to a 5-5 tie with Medicine Hat Hounds (6-2-2) at the Taber Arena on Sunday, rallying from 3-0 and 5-3 deficits to earn the single point.

Roersma had the hat trick and Verloop had two tallies for the Golden Suns. Heins had two assists and Degenstein, Verloop, Landon Porteous and Caylee Crowson had single helpers.

Porteous earned the tie, facing 26 shots on goal in net for the Golden Suns.