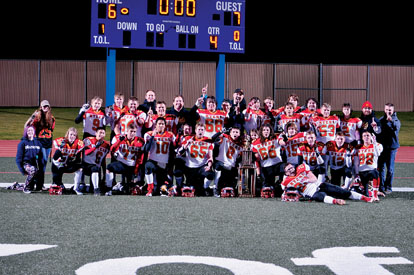 TEAM SUPREME: W.R. Myers Rebels football team shows off how they are number one, in which the Rebels’ 7-6 win over Chinook is fitting, giving the team the number-one ranking with Football Alberta’s Tier IV team rankings. TIMES PHOTO SUBMITTED

The Rebels were able to pry the Jerry Dawson Trophy from its opposition’s hands as defending champions, with a 7-6 victory at the university of Lethbridge last Thursday.

“Chinook was able to move the ball on us a little bit and we were able to move the ball on them. We got into their red zone a few times and we weren’t able to capitalize and they did the same thing,” said Adam Hughes, head coach of the W.R. Myers Rebels football team. “We scored in the first quarter and then they didn’t score until 16 seconds left.”

The late score made for movie-like dramatics as a time-out was called where some earlier practice chatter proved prophetic.

“Earlier in the week, Brad Marsden and I were talking and casually asked him if he could hurdle the centre and be able to block a kick,” said Hughes.

There was no hurdling, but rather perfect anticipation of a snap count to block the extra-point attempt, making the Rebels the Southern Alberta High School Football League Division ‘B’ Champion. Marsden gained positioning before the Coyotes line was even able to get out of their stance.

“Marsden managed to zip through the heart of their offensive line like greased lightning, and was in place to block the kick before the kicker had even made contact with the ball. That blocked kick sealed the win for us. I don’t know if I’ve ever been as proud of this defense as I was at that moment,” said Jason Jensen, defensive co-ordinator of the W.R. Myers Rebels football team. “Being able to recover quickly, and pull off a game-winning PAT block cemented in my mind what I had suspected all year; we’ve got something special here.”

Marsden’s huge game included 54 yards receiving and the Rebels’ lone major to go with five tackles and three interceptions as the Rebels’ ball-hawk.

Evan Harkness churned out 199 yards rushing on the ground.

“We didn’t really know what to expect. Chinook has been up and down. They’ve lost to some teams that are weak and they have also beat some topnotch teams. We expected it would be a close game and we got the good Chinook team that night,” said Hughes. “We always talk about how two or three plays that can help define a game and we were able to win those defining moments.”

Chinook’s roster was not filled with a bunch of pushovers as their roster includes the league’s reigning Division ‘B’ Most Outstanding Quarterback (Nick Myndio), Most Outstanding running back (Tim Prankard), and an All-Star receiver (Connor Lozza). The running back and receiver have represented Canada in international competition in Texas as well.

“Chinook hit us with a varied attack, passing, running outside, running inside, and even trying a touch of trickery with some flea flickers, and halfback passes. They moved the ball on us a bit, and there was more than once that we found ourselves defending deep in our own end,” said Jensen. “We chased them down all over the field, with 17 different players registering tackles.”

“When you can intercept the league’s top quarterback six times, including what may be the most athletic interception I’ve ever seen by Ashton Bekkering, you know the boys are playing well,” said Jensen.

The Rebels now have a well-deserved week off, getting a bye into the zone final where they will face the winner of this weekend’s Pincher Creek/Willow Creek contest. The zone title game will be at Ken McDonald Memorial Sports Park on Nov. 4, with the winner having the right to host first round of Tier IV provincials.

“To hoist that Jerry Dawson trophy was really something special. In the 15 years that trophy has been around, we’ve never won it. I’ve coached most of these boys since they were 10 or 11 years old, so I think after all we’ve been through together, it makes this win just a little more special,” said Jensen. “Really, it’s just a great way to cap what has already been a magical season, and set a tone for provincials going forward.”

With the film now being out on the Rebels’ undefeated regular season, Hughes noted the team has to adapt as it tweaks its game plan in the next two weeks of practice.

“We have to be proactive in our adjustments. We will be installing new formations on offence and some new coverage on defence,” said Hughes. “We aren’t throwing our old stuff out the window that has made us successful, we are just adding to it. We have to develop new areas to exploit.”

REBEL YELL: The latest Football Alberta rankings are out and W.R. Myers Rebels (7-0) are the number-one ranked Tier IV team (population 449 or less) in the province, followed by Sexsmith (7-1) and Ardrossan (4-1-1). Thursday’s win marks the second time W.R. Myers has won a league title.