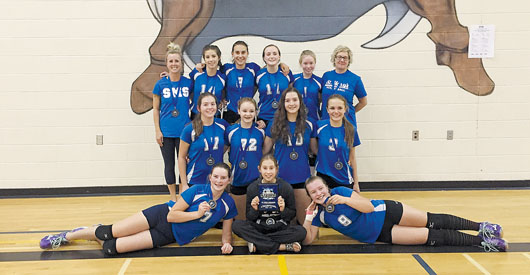 Senior varsity Storm girls volleyball team emerged with the title of its home Big Storm tournament this past weekend.

The squad won its pool before defeating a tough Irvine squad in the crossover semifinals.

The final match went the full three games in the defeat of Foremost.

“The Storm dominated the last set through amazing serving, passing and communication. The girls played as a team and really came together as a group this weekend. We are so proud of them,” said Kira Lawrence, head coach of the St. Mary’s Storm varsity girls volleyball team.

“The Big Storm Tournament was a huge success all with thanks to our incredible St. Mary’s community. We had alumni out to help, as well as our current Auroras and Celtics here for officiating all of the games,” said Lawrence.

“We also had parents and teachers filling many important roles, and our own Storm players filling in anywhere that was needed. The support of our community is a massive attribute to the success of our teams.”

The Grade 7/8 girls team finished in second, losing to St. Francis from Lethbridge in the final.

In league play on Thursday, both the varsity and junior varsity Storm boys teams won against St. Joe’s.

The tournaments and league play mark the plethora of volleyball St. Mary’s has, as along with their high school teams, the school is running four junior high girls and two junior high boys volleyball teams.