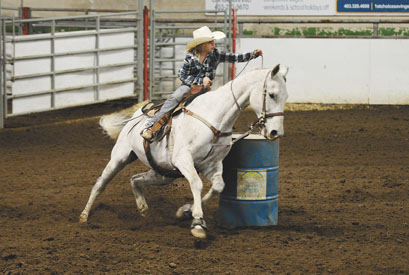 Recent lack of communication between the Town of Taber and the Taber Exhibition Association over improvements to the Taber Agri-Plex prompted a procedural issue that needed to be clarified before the project could move forward.

The town had received a letter from the Taber Exhibition Association (TEA) requesting that council consider the tinning and strapping of exterior walls of the Agri-Plex building owned by the Town of Taber (Plan 8410163, Block 1, Lot 1; 6602 53rd Street) by the lessee, the TEA. In accordance with the current lease, Sec. 5, any improvements to the premises contemplated by the leassee must be approved in advance with written notice to the town prior to improvements being initiated, and that those improvements would become the property of the lessor (town) upon termination of the lease by either party following the expiration of the current agreement. The term of the current agreement is 35 years, from Nov. 1, 2005 to Oct. 31, 2040.

“We need to do some maintenance to the walls of the Agri-Plex,” said TEA president Sherry Crombez, speaking to council at their Sept. 12 regular meeting. “The cinder bricks are starting to get frost coming through. So we had somebody out that wanted to paint it, and they said that the west wall they would not paint because it needed more. So we came to the idea of tinning and strapping it, and we did a quote. We had six or seven quotes. We didn’t go with the lowest one, we went with Southwest (Design and Construction Ltd.) because they met our specs for insulation and a heavier gauge tin. So we need permission from the Town of Taber council, the owner of the Agri-Plex, to do this maintenance.”

According to Crombez, the TEA originally believed they did not need to seek the approval of Taber town council to proceed with the project as the assumption was made that the project scope was simply maintenance, for which the lessee is ultimately responsible.

Coun. Randy Sparks indicated that it was still vital that the Town of Taber, who maintains ownership of the building, be kept apprised of any improvements to be made in future.

“That’s just an oversight. But it still isn’t maintenance. It’s different than just going and sandblasting the cinder brick. So it’s nice to keep administration in the loop with anything that’s going on over there, so they’re aware, because it’s not like doing something on the farm,” said Sparks.

“It’s a town building, and so there’s certain things that must be looked at by engineers to make sure it’s done in a proper manner. Just keep these guys in the loop and it’s better for everybody.”

According to administration, TEA members would like to see construction of the proposed facility commence before the end of September. The group has already tendered the project. Project scope includes removal of existing metal cladding and west wall fan ducts, new strapping and rigid insulation to be placed under new red cladding, with all accents to be white metal flashing. The cost of the project has been quoted at $155,300 by Southwest Design and Construction Ltd.

“From what I’ve seen, with what you guys have done, improvements have been quite substantial, and it’s nice and clean looking,” said Coun. Jack Brewin, referring to the TEA’s previous stewardship of the building as the lessee. “I think if we can help with this we should. It is a public, Town of Taber building, we want it to look good. People don’t know that we have that, it’s not advertised as much as the curling rink or the ice rink. A lot of people are involved with the agriculture and the exhibition association out there. I watch kids ride, and everyone else come to it, and all the rodeos you put on are very well run and well attended.”

According to administration, the TEA has indicated they have the funds to complete the project in their maintenance reserves, but do not want to deplete their cash reserves for the following season. The TEA was also seeking advice on funding avenues available to them, which could involve applying to the town to cover the entire project by a requested debenture in the 2017 town budget.

Coun. Joe Strojwas questioned Crombez about the possibility of the organization seeking a debenture through the town, and just how much the TEA might be seeking in future.

Crombez pointed out that there are plans in the works to replace the building’s roof and construct a warm-up pen in addition to the present project, which would require a significant capital investment.

“With everything, including the tinning and strapping, we would be looking at a $625,000 debenture. We’ve applied for some grants. So we’re just kind of exploring, because we don’t know where to start. We know what needs to be done.”

Finance director Devon Wannop assured council such a debenture could be possible, but would eat into the municipality’s own borrowing capacity.

“The only thing that would happen if they borrow on behalf of us, is that we’d lower the amount we’d be able to borrow for other projects. Our capacity right now is still pretty good. The ACFA gives municipalities a way better rate than they’d be able to get at a bank.”

Following a lengthy deliberation of the need to include engineering oversight of the work to be done, or engineering inspections once completed, this recommendation was dropped from the finalized motion.

Following discussion at their Sept. 12 regular meeting, town council voted unanimously (6-0) that in accordance with the existing lease between the TEA and the Town of Taber, Sec. 5, Additions, Alterations or Renovations, authorizes the Taber Agri-Plex project scope of work to be managed by the TEA, including removal of the existing metal cladding and west wall fan ducts, the installation of new strapping and rigid insulation to be placed under new red cladding with all accents to be white metal flashing; and that such work be done in accordance with Southwest Design and Construction Ltd. Option 2 bid. Mayor Henk DeVlieger declared a pecuniary interest and did not participate in the discussion or vote.

“We all feel it’s a worthwhile project, I think we need to have better communication between the TEA and council with regard to the building, so we’re aware what’s going on,” said Coun. Laura Ross-Giroux.

The current Taber Agri-Plex building was constructed in 1982.