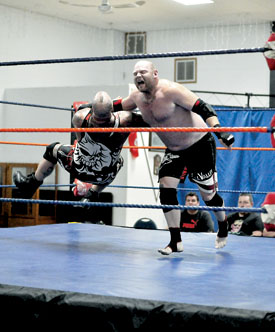 They may not have torn the roof off, but a highlight-reel main event finisher could have driven the Pure Power Wrestling ring through the Taber Legion floor on Friday night as the stars of PPW invaded Taber for the first time ever.

“All I want to do is regain my title and then get out of this pile of vomit as soon as possible,” he said, to a chorus of boos from the audience.

A roar from the crowd welcomed Massive Damage to the ring as Taberites howled for justice.

The two bitter rivals pounded each other around the ring, until the champ went down and MacBain headed for the top rope to finish him off.

He took too long to make his move, however, and Massive Damage made him pay. The champ softened MacBain up with a series of chops, and then executed a devastating superplex off the top rope with a crash that was probably heard all the way out in Ken McDonald Park.

In another title match, Cyanide took on “Youngblood” Cody Blayde for the PPW Cruiserweight Championship. Vinnie “Black Heart” Valentine, who speaks for Cyanide in all things, took to the mic to mock what he deemed Taber’s “redneck” fans.

He even went so far as to try and steal an eldery man’s cane, but gave up when the man proved too tough to be easily bullied.

The match was a battle to see who could impose their will on their opponent and force them into the kind of match each specializes in — Blayde is one of the great high-fliers in PPW, and Cyanide, as his name suggests, is a much more methodical grappler, always looking for an opportunity to sneak in a poisonous blow.

They gave fans a bit of both. It became clear early on, however, that Blayde was having a hard time keeping an eye on both Cyanide and Valentine, who took every opportunity to interfere in the match on behalf of his client.

The bout ended in chaos, as Cyanide distracted the referee long enough for Valentine to interfere in the match.

Cyanide then used the ropes to gain the pin and what he thought was the Cruiserweight title.

That was not to be. PPW Commissioner Gothic Knight came out to inform the crowd the match would be voided due to Valentine’s interference. In the confusion that followed, Blayde was able to regain the upper hand, land his moonsault, and hold his title.

The undercard featured a match between former friends and now hated foes Chris Perish and Sydney Steele. The two are evenly matched in skill and experience. In the end, it was Perish’s willingness to do whatever it takes to win that saw him victorious. After distracting the referee, he dropped Steele with a low blow and quick pin.

Killer Bee took on Nightmare in the opening match of the evening. Killer Bee’s antics in the ring and the contagiously smiley mask he wears have made him a fan favourite.

Nightmare, on the other hand, introduced himself to the crowd by yelling at children and generally being disgusted with those in attendance.

The Bee scored the pin, but then paid a heavy price as Nightmare beat him senseless after the match had ended.

The Primate Silverback has been trying to get his hands on “Cougar Meat” Kyle Sebastian ever since Sebastian leveled him with a superkick and shaved a piece of the Great Ape’s beard off, as part of his invitation for Silverback to join Sebastian in his “Adult Social Society”.

A former Taber resident himself, Silverback got his chance in front of a sea of familiar faces at the Legion. Sebastian is the faster and more experienced of the two, and he used both to great effect, working the legs of Silverback and trying to keep out of the monster’s grasp.

Time and again, however, Sebastian ran into the raw power of the Primate.

The match seemed over when Silverback crushed Sebastian in the corner, then deadlifted the boy toy into a powerbomb.

Sebastian kicked out of the pin, landed another superkick to Silverback’s chops, then angrily announced he would grant Silverback his “first win in six months.” As the referee counted him out, Sebastian crawled up onto a chair in the audience and tormented both Silverback and the crowd with hip thrusts and smack talk, while Silverback could only look on in frustration.

“I don’t even count it as a win,” Silverback later said. “It was definitely manipulated by him. It was how he wanted to go out tonight. He took my beard. I wanted to tear his face off. I wanted to scalp him in that ring. But not tonight, and I think he knew that.”

Twice now, Silverback’s interactions with Sebastian have ended with superkicks that have laid the monster out.

“It’s a good kick,” Silverback said. “It’s nice and stiff, but I need to learn from my mistakes. He caught me completely off guard last month. Tonight I should have seen it coming. I think if he tries to pull it again, I’ll catch it and break his leg. I’ll break it and make him walk to the hospital.”