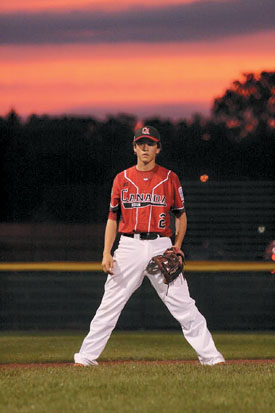 For a baseball team that at first struggled to find its consistency in Taberite Kole Fujita, playing alongside the Lethbridge Giants, the squad peaked just at the right time and punched its ticket to the Little League Junior World Series in Taylor, Michigan which concluded early last week.

The Giants earned the trip by winning the Canadian championships previously as the host team.

“We were pretty much ahead of the rest of the competition. We only lost one game in round-robin to Medicine Hat, but then we beat them in the final 11-1,” said Fujita. “We had all of our pitching in the final. We threw mostly everyone in the semifinal, but only 20 pitches (maximum) so that we could have everyone for the final.”

Lethbridge Giants beat Ontario in the semifinal, blanking the opposition 6-0 in the process. It was dominance by the Giants that was showcased throughout the Canadian championship beside the lone hiccup in a 7-5 loss to Medicine Hat. The rest of the competition featured double-digit victories in round-robin play.

“It was pretty balanced hitting throughout the line up,” said Fujita who hit .463 for the duration of the Canadian championship.
Fujita was the super utility player for the Giants in its Canadian championship run, spending time at third base, left field, centre field, right field, pitcher and catcher.

The Lethbridge Giants would move on to the Little League Junior World Series in Taylor, Michigan, where the Giants did not shrink against the best baseball competition the world had to offer for 14 and 15 year olds.

The Giants would finish Little League Junior World Series play with a 2-2 record with every game being close.

Pitching was dominant and hitting was sparse in the Giants first game, a 2-0 loss to Mexico.

“Their pitcher was really good. Against Mexico, we were pretty nervous and stuff. That game I think we only got two hits,” said Fujita. “Their pitcher threw a lot of curveballs. He threw heat where we would be patient and watch the first pitch, but then he would come back with curveballs and our team wasn’t good at hitting them. We struggled hitting the slow stuff.”

Lethbridge Giants bounced back with a 7-5 victory over Europe/Africa (Czech Republic). The team proceeded to drop a 7-5 decision to (Panama) Latin America.

“We were up 5-3 against them, and then they got runs because we made a couple of errors. That’s a game we should have won,” said Fujita, adding the Lethbridge Giants concluded its tournament run with a 12-9 win over Central America. “I didn’t expect us to be that close to so many teams, especially like teams like Panama. Mexico is usually pretty good, too.”

“It was great. It was super fun. I actually got our first hit of the tournament for our team against Mexico,” said Fujita. “It was a great experience. It’s something I will never forget.”