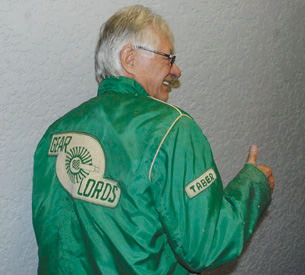 The sounds of summer bring with it memories of car cruising past.

Only for some, it is not just the Sunday drive with the top down and classic tunes blaring on the radio, but a need for speed.

Those memories were recounted earlier this summer in mid-July at the residence of Johnny Pecz as the Gear Lord’s Car Club membership had its privileges way back in those Taber days of 1969.

While only in existence for a brief amount of time over a few years, the club peaked in interest with membership over 50 from its humble beginnings of 12.

There were 21 former members who attended Gear Lord’s Car Club reunion this summer, recounting those memories of 1969 Firebirds and 1967 Barracudas that cruised the Taber streets and dragged the Taber highways.

“When the club first formed, we threw it out there with different names and it seemed to stick,” said Pecz of the origins of the club that was seen as a way for young drivers to gather in camaraderie for their love of cars along with promoting vehicle safety and maintenance.

Members would drag race out in Fort Macleod, Claresholm, Vulcan, Calgary, Great Montana, and Wassa Lake, British Columbia. Pecz himself was drag racing his family car back in 1959 as a wily teenager.

“I’d sneak the family car out on the track, we weren’t even really racing for anything except for the thrill as friends at that time,” said Pecz.

Members of the Gear Lord’s Car Club regularly supported drag racing out on a 1/4 mile drag strip track in Vulcan.

“It was a fun thing to do, but it was costly. In the three years the club was in existence, I only made it down the track three times,” said Pecz with a chuckle. “I kept breaking down. I had a lot of power, but I didn’t know how to drive. The thing with the club was for 95 per cent of the club, the cars they used (drag racing), were their daily-driven cars. It’s not like you see nowadays with all these specialty cars. The cars back then were used for two things.”

According to club documentation, some Taberites found it ironic that there was a car club in existence that preached vehicle safety, yet reveled in what could be seen as a high-risk endeavour in drag racing.

But every authorized drag strip had its safety rules, and if a car could not meet a set of specifications, it was not allowed to race. Authorized drag strips had many fire extinguishers on hand, and generally an ambulance was on hand in case of any freak accidents. Also, keeping the activity all in one area helped stop youth from branching out into various different areas around town. But in those brash teenager and early 20s days, Pecz admitted Gear Lord drag races were not always authorized.

“The way a lot of this started, was as young kids, we would go up Highway 36, where after school, or sitting in a bar, we would challenge people to a race,” said Pecz. “The town police could not go past a certain area, so a mile out it was basically RCMP. There were times they would sit on the side of the road waiting for us because they’d catch wind of races. We’d see their (police) lights, and one guy would take off while another would pretend they were broken down. Basically, we got a lot of speeding tickets, but never really got caught for drag racing side by side.”

Pecz recounts an incident where a Gear Lord’s Club member took a paint can and marked off a quarter mile line right on the highway.

“The police heard about it and repainted the lines for us,” said Pecz laughing. “It was a nice, new line. I don’t know if the police did it for safety (to keep drag racers from other areas), or just encouraged it to catch us.”

As races got to be too interrupted by authorities, the club decided to go further up on Highway 36 where races got some extra viewership from the rural community.

“There was a farmer who would sit out there on a Wednesday night, knowing we were coming. He would take a lawn chair and sit out there and wait until we raced. He loved it,” said Pecz. “Most of our races were right after our meetings.”

Derrick Simpson was in attendance at the Gear Lord’s and Gals Car Club reunion this summer which was in the basement of his home where the inaugural meeting took place on Feb. 27, 1969, as the club started off with 12 members. A complete governing body was selected and a constitution for the club was drawn up.

The club would put on car rallies that would serve as a treasure hunt around town for members to use their cars, along with holding raffles and eventually building a club house. The club house was built by members. The club house was an old double garage, which was completely insulated, fitted with natural gas, heat and electricity. The garage was divided into two sections, one section was for the weekly meetings while the other section was work space for members to work on their cars.

“It was a club thing, where everyone got along good and the reunion was bringing people together. It brought back a lot of good memories. The wives were invited too,” said Pecz, adding there was still one of those original cars from the club days still kicking around in a 1969 GTO 400 from Neil Sakamoto, adding reunion members traveled from Lethbridge, Coaldale, Medicine Hat, Saskatchewan, and Kalispell, Mont.

“We were all good friends at the time, and this reunion, even though a lot of the people still live in town, life gets busy and this was a special thing to bring people together.”