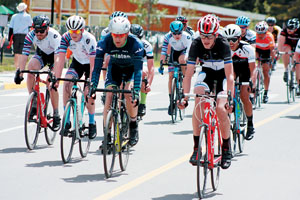 (Photo Submitted) BROTHERS IN ARMS (AND CYCLES): Mason and Kaleb (pictured) Muller are making an impression in the world of competitive mountain/road biking, just as they have in speed skating and St. Mary’s School athletics.

The brotherly love in high-end athletics continues for the Muller family.

Mason started competing in mountain and road biking this year, taking a que from his older brother.

Mason’s season started out in the Coulee Cruiser in hopes of qualifying for Zone 1 at the Alberta Summer Games, which concluded earlier this month in Leduc.

He did just that, eventually placing seventh out of a field of 14 in his age category at the Games in the second day of the competition.

There was an Eliminator portion on the first day which Mason placed eighth overall and the team portion of the relay had the zone finishing in fourth.

“I thought I did pretty good (in the Eliminator) because that was my first one ever. There’s a 500-metre loop and it’s like speed skating in a sense with four people on the line where the top two people advance and the bottom two are eliminated,” said Mason.

“It comes down to the final four with the fastest people in the race. It can get pretty vicious because everyone is just giving ‘er to get those top two positions, so things can get pretty sketchy. It can get pretty dangerous, because you’re not hitting anything like mats like you are doing in speed skating, you’re hitting the hard ground. You are trying to stick around the front and get those good positions early on so that you are not rushing towards the end.”

Mason also won his U17 expert category in the Canmore Mountain Festival.

Kaleb has had a very busy cycling season, having competed in four mountain biking Alberta competitions, finishing in first twice, third once and a fourth-place finish in the expert category.

If Kaleb manages two more wins, he will be upgraded into the Elite category.

Kaleb also competed at nationals in Quebec in which he finished 18th out of 29 racers.
Kaleb’s goal this year was to make the Alberta team, which he did as one of only four from the province.

“It was my first time at nationals, so I wasn’t really expecting much,” said Kaleb. “I had never competed against any of those other racers before. I just wanted to see what I was up against.”

While more seasoned than his little brother in competitive mountain/road biking, it has still been a learning curve transitioning from speed skating and the previous most competitive cycling was the Southern Alberta Summer Games which the Muller family regularly competes in.

“I’ve learned that starts are really fast and I’m not used to that. It’s full out for the first lap. If you’re not used to that, it’ll catch you off guard,” said Mason, as he has transitioned himself into competitive mountain/road biking.

“And in technical spots, if you are not pushing yourself, you are going to lose your position pretty quick.”

Kaleb was the first one to attempt to take up competitive mountain/road biking, simply to serve as a cross trainer to build his strength as a speed skater, but the competitive juices continued to flow in another of his many athletic pursuits that stemmed from St. Mary’s School athletics as well.

“I really started to enjoy it, so I looked into a couple of races which I entered and it went from there,” said Kaleb.

“When he starts to do stuff, I start liking to do it too,” added Mason with a chuckle.
“We’re both super competitive, so if we are doing something, we want to be racing and beat other people, that’s always fun.”

That competitiveness with others can turn to a sibling rivalry as well even though the two compete in different categories, as Mason looks at the bench marks his older brother has set for him in previous years.

“For speed skating, he looks at my times when I was at his age and he compares,” admitted Kaleb.

Both Kaleb and Mason plan on competing at the Tour du Bowness at the end of this month in Calgary, which is a three-day road race.

Having already accomplished some lofty personal goals, Kaleb is hoping to go to the Canadian Summer Games next year. It will make him a dual threat, having already competed in the Canadian Winter Games. It would make Kaleb a part of a small percentage of Canadians to accomplish the feat.