Vipers swim in the great outdoors 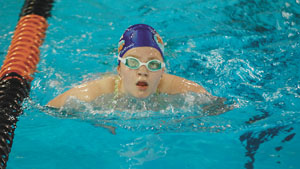 (Photo by Greg Price) LANE CHANGE: Mikaela Crowson (pictured here at a Vipers practice), made her way to the Crowsnest Pass Piranhas swim meet where she recorded a second-place time in her 50-metre backstroke event where she had to battle rainy conditions.

It was a smaller contingent at the Crowsnest Pass Piranhas meet this past weekend, with 15 members of the Taber Viper Swim Club attending, as swimmers battled the elements in the outdoor conditions.

“It is a lot more challenging in outdoor meets. This past weekend, we had thunder breaks, and then it was raining and kids on the backstroke were getting rain on their faces trying to swim. Then you have the cloud shadows where you’re trying to find the wall, it’s hard to see sometimes ” said Teri Cook, head coach of the Taber Viper Swim Club. “And if it happens to be really warm, you have the sun in your eyes in the backstroke. The fact our kids were able to get around their best times, they did really, really good with the weather variables.”

“Mikayla Kress broke a Viper record for 25-metre flutterboard, a record that had been there since 2001,” said Cook. “We are having a lot of kids working their butts off, going to two practices a day now and working as hard as they can to get better and take time off their races. The dedication that has come through in July is amazing and you see how the kids are improving.”

The following are a list of top-three finishes in individual events:

Taber Viper Swim Club is in an outdoor meet in Fort Macleod this weekend, followed by a weekend off. Then the Vipers compete in Nanton, followed by regionals and provincials.