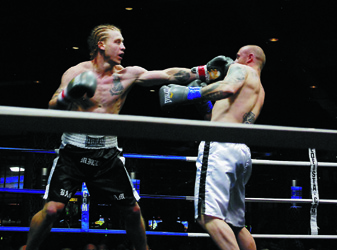 It was a long, hard journey for Taberite Joel ‘Bam Bam’ Mills back into the professional boxing ring.

Seven calendar years passed until last Saturday at the Deerfoot Casino in Calgary. Ironically, if you blinked, you may have missed his first fight coming out of retirement as he dispatched Justin Schmit in the first round via KO after his second knockdown in which Schmit did not get up.

Mills celebrated his 29th birthday on Saturday by not only blowing out the candles on his birthday cake, but blowing away the opposition as well.

Although Mills did admit the adrenaline was flowing, which caused him to go a bit off his game plan to start the round where he was over aggressive against the much heavier Schmit.

“When I first went in there, I probably had a bad strategy because he was quite a bit bigger than me. After the weigh in, he dehydrated to around 200 pounds,” said Mills.
“I was giving up 15 to 20 pounds and best strategy against a guy like that is stay on the outside and box and try and use your speed, and not expect the knockout. But, my fighting instincts took over and I went in and started scrapping him right away.”

Despite Mills being the more seasoned fighter, that kind of weight disadvantage could have gave Schmit a puncher’s chance getting in that one lucky strong hit, in which he was able to do just that in Mills’ bull-in-a-china shop mentality to start the round.

“He actually hit me with a pretty good left hook that wobbled me at the start. I took a step back, took a breath and said ‘OK, time for some strategy,” said Mills. “I can’t street fight this guy, he’s a dangerous big man.”

Switching on the fly, Mills stayed on the outside, trying to set him up with his right hand in which he started to find the target.

“In fighting and boxing, when it comes down to its most purest form, you are fighting against your own instincts. You need to be relaxed when you are in a fight. You have to hit hard, but you have to be measured,” said Mills.

“There are things you have to fight against that your body instinctually wants to do. My maturity came into play. If I would have just fought (Saturday) night and just stood there trading punches with the guy, I am sure I could have still won the fight, but it would have been a lot harder night for me.”

Mills started feinting to get Schmit to buy on certain moves so he could set up his right hand overtop.

Being around the fight game for 20 years, even at the prime age of 29, Mills admitted he still had butterflies leading up to the fight, which was replaced by a stillness knowing of the support of fans and family at the fight as he proved once again he belonged in the ring in competitive boxing.

“Leading up to the fight, there were tons of butterflies. But just like it has always been with me, once I get to the actual event there were none. When I was in the dressing room I was so relaxed and serene. It was almost like I felt like there was something wrong, I should have been amped up more,” said Mills. “I think maturity has played a big role. It is the same feelings and the same nerves, it’s just I have eight more years of life experience and better ways of dealing with those nerves now.”

Whatever the official seating capacity was at the Deerfoot Casino, a cursory look around the ring could see that Taberites filled at least half the seats, if not three quarters for the fight card where Mills was the main event.

“It blew my mind the support I got and this is who I do it for. My comeback was encouraged by the people who have behind me since I started. I felt like we all did this together,” said Mills.

Mills’ father Earl agreed, noting just as Mills has battled back from injury to get back in the pro fighting ring, he wanted to give something to Taberites who are fighting themselves as Alberta continues to try and dig itself out of economic recession.

“His biggest motivation is things have been bad around Taber economically and every being down. Part of his motivation was to do just what he did (saturday) night, was get a bunch of people together, have some good times and watch some good boxing.”

Having surgery on his elbow in January which proved bothersome for years, Mills’ father who has watched his whole career from amateur to pro could see the difference in the ring after the surgery.

“As soon as he got that elbow fixed, it meant a world of difference. It always used to bother him in past fights,” said Earl Mills. “I had never seen him knock out a guy with his right hand like that. That is all in the right elbow surgery. It was always his left hook that was his bread and butter before. I know he has some dynamite in that right arm.”

There have already been talks about Mills singing on for a second pro fight, with possibly the fight card being in Mexico.