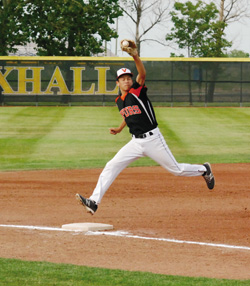 The Vauxhall Spurs pushed its record to 9-3 over the weekend after a solid weekend of American Legion ‘A’ baseball.

The Spurs swept its doubleheader against the Fort Macleod Royals at Jets Stadium on Friday night, but needed one big offensive inning in both games to put the team away.

The Spurs 11-4 win in the first game was highlighted by K.J. Moreno who was solid with the glove and the bat. Moreno tossed a complete game on the mound, scattering five hits with the four runs tagged to him aided by two Spurs’ errors in the field, as Taber’s Darian Simmons made the Spurs pay with a bases-loaded double that cleared the bases for three RBI for the Royals.

But Moreno got the last laugh with four RBI on two hits, including a two-run home run.

“We got two Ws at the end of the day, but we have to play with more intensity. Nothing against the Fort Macleod Royals, but I believe we are a better ball club with our veteran team, and we can’t play down to teams levels,” said Joel Blake, head coach of the Vauxhall Spurs who needed an eight-run fifth inning that chased two Royals pitchers to safely put the ball game away.

“At times we still look sloppy and lackadaisical at times. We have to play hard, pedal to the metal. We were tied 4-4 after four innings against an arm we should have banged around a bit better. But at the end of the day, we got the wins.”

The Spurs then beat the Royals 15-4 in the second game which was called early after six innings after Spurs first baseman Vance Fode smashed a multi-run home run in the sixth inning to call the game.

The Spurs then hosted Medicine Hat Knights on Sunday afternoon and earned the split in a Jekyll and Hyde performance.

The Spurs won the first game 8-2 in a gem of a game by Jalen Lane on the mound.

He struck out 12 Knights over six innings with Brant Mack and Blaise Unruh coming on in relief.

“We played pretty good” said Blake, adding he could not say the same for a disaster of a second game to end the Spurs’ homestand on the weekend.

The Spurs lost 15-7, as the Spurs could not recover form a forgettable first inning.

Ryan Marshall and Hunter johnson both struggled on the mound as the Spurs had to burn through three pitchers to escape the first inning.

“We ended up making a ball game out of it with our bats, but it was sloppy. We were down by a touchdown and we were making outs on the bases. I wasn’t happy with the way we played our last game,” said Blake.

The team now prepares to play a new team to the league in the Lewistown Redbirds on Thursday at Jets Stadium in Vauxhall. Game time is 6 p.m. and 8:30 p.m. under the lights.

“I heard they are competitive and they have a couple of good arms that won’t overpower you, but they really fill it up with some good offspeed stuff,” said Blake.

The Spurs travel to Fort Macleod on Sunday to battle the Royals and then return home on Monday to host the Y’s Men Miners. Game time is 6 and 8:30 p.m. The Spurs finish off a busy week of American Legion ‘A’ baseball with a doubleheader against Tri-County Cardinals at Jets Stadium next Wednesday. Game times are 5:30 and 8 p.m.