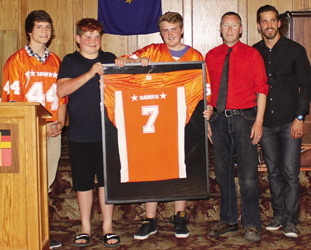 “Really, the credit has to go to the kids,” said Simmons. “Those young men put in the time and effort each and every week and ultimately, that led to a lot of success for us on the field.”

Taber flew through the regular season with only one blemish on the team’s record, a loss to the Brooks Roadrunners, a league powerhouse that featured 31 Grade 9 seniors on the roster. The Rebels went undefeated the rest of the way in the regular season and had a strong playoff run, highlighted by a 34-23 win in Cardston.

“That was a huge win for our program,” said Simmons of the Cardston game. “At the bantam level, it had been a long time since a Taber team went into Cardston and won, and the fact is was a playoff game made that even more special.”

Taber’s playoff run ended a week later in Raymond, against a talented Comets squad, but nonetheless, Simmons added it was a season to remember for the Rebels.

“We had one of the highest-scoring teams in the league and our defence was one of the best units in SAMFA was well. We had a talented, athletic group of Grade 9s and some really solid rookie Grade 8 players that played some valuable snaps for us as well.”

A successful 2015 campaign followed up a 2014 season where the Rebels won the SAMFA Division III championship. The 2014 season ended on a high note, but included some struggles along the way as well.

“It certainly wasn’t smooth sailing like it was last year,” said Simmons of the 2014 campaign. “We did suffer some early losses that season but in the end, the ship was righted, the kids fought through some adversity and we turned things around in the playoffs.”

The 2015 season also earned the Rebels SAMFA’s Most Improved Team Award, as Simmons added Taber’s Kadin Reynolds was also recognized Saturday night with the league’s Rookie of the Year Award.

“Kadin, for a first-year football player, had an absolutely tremendous season for us,” said Simmons. “He was a major contributor on offence for us and was one of our leading tacklers on defence. That playoff game in Cardston really summed up his season, as he got us on the board with the game’s first touchdown and sealed with victory with an interception.”

Reynolds was also one of five Rebels recognized as SAMFA all-stars, along with Brett Andrus, Mike Sawatzky, Johnny Tams and Ashton Werewka. In Saturday afternoon’s all-star game, Andrus chipped in with a key interception for Team Orange, while Sawatzky recovered a fumble for Team Purple. Tams missed the game after he suffered an injury during Friday night’s all-star practice.

“All four of our Taber kids made significant contributions in the all-star game,” said Simmons, who head coached Team Orange, which also featured W.R. Myers Rebels defensive co-ordinator Jason Jensen on the coaching staff, to a 17-12 victory. “Brett’s one-handed interception in the endzone in the first half was one of the biggest plays of the game, in fact, and had a lot of people talking.”

Yet despite all of the success the bantam program has experienced the past few seasons, the fate of the team in 2016 is still very much in the air.

“We graduated a lot of Grade 9 players to high school, and our Grade 8 group was fairly short on numbers,” said Simmons. “We only have four Grade 7s moving up from peewee, so there’s a chance we won’t be able to even field a bantam team in 2016. Realistically, we need another 10 kids or so to get a bantam team off the ground for the fall.”

Simmons added the bantam program can accept players, going into Grade 8 and Grade 9 in the fall, from all eligible Taber schools (D.A. Ferguson, St. Mary’s, Taber Christian and W.R. Myers), along with area schools such as Barnwell, Enchant, Grassy Lake, Hays and Vauxhall.

“I’ve even had players from the Milk River and Warner areas in the past in my peewee program,” said Simmons. “It would be a shame if we couldn’t enter a team in SAMFA next season, after all the positive momentum we’ve built.”

Simmons added football is a sport for everyone, where kids of every shape and size are needed.

“I’ve witnessed first-hand some of the amazing things the sport can do for kids. I builds self-confidence, teaches teamwork and instills a solid work ethic. It may be tough for some kids to excel on the hockey rink or the basketball court, for example, especially maybe the bigger kids, but in football, we need every type of athlete, from the small speedster to the giants who play on our offensive and defensive lines.”

For more information about the Taber bantam Rebels program, contact Simmons at 403-382-0681.