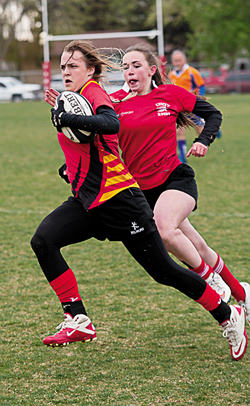 The varsity girls rugby team was able to upend Raymond 28-12 at W.R. Myers Field on April 26.

“That was a really good win. It was the first time ever the seniors have beaten Raymond in league competition. There were several factors that helped the win,” said Andrew Llewelyn-Jones, a co-coach with the W.R. Myers Rebels girls rugby program. “One was the commitment to the tackle. They really put pressure on the Raymond line. Every time Raymond had the ball, the Myers line speed was very good, putting a lot of pressure on Raymond. When you are playing under pressure, you tend to make mistakes and that’s what happened.”

Also the Rebels shone in the transition game in keeping its momentum going with superb offloading, passing the ball to teammates before being fully tackled.

“The girls worked on that during the week very hard in practices before the game and it paid off,” said Llewelyn-Jones. “They executed their offloading very well. The commitment was there from the players, you could see they were up for the game. They really took it to Raymond and they got the win. Raymond had two big wins before this game, so I’m sure their confidence level was high, but they were up against a determined Rebels team.”

“It was a very close match right to the very end at one try to nothing right up until the last few minutes where Raymond got a couple of breakaway tries right at the very end,” said Llewelyn-Jones. “Again, there was a huge commitment from Myers on the line, putting a lot of pressure on Raymond. We were camped in their half for quite long periods of the game. It was one of those games where we just couldn’t turn our field supremacy into points. Nothing would go our way. Credit to the Raymond defence on their win I was happy with how the Rebels performed.”

In league play, the W.R. Myers Rebels girls rugby team hit the road with a match against Matthew Halton on Tuesday in Pincher Creek with results unavailable at press time. The May 13 weekend will see the Rebels with a taste of tournament play with junior varsity at the University of Lethbridge and the varsity squad at Ross Shepard in Edmonton.