Certification comes through on range 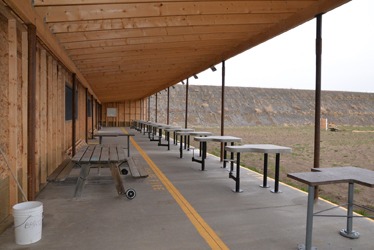 The beginning is now in the crosshairs for the opening of all ranges at the Municipal District of Taber Shooting Complex.

Although the 100-metre range was open last year, the remaining ranges in the shooting complex were left waiting on certification. Certification has just come through on three other ranges, so shooting enthusiasts around the municipality have access to four different ranges in the facility, provided workers are not in a range.

“We started this ten years ago, when it was a dream,” said Ben Elfring, M.D of Taber councillor and member of the Taber Shooting Foundation Committee, speaking of when the idea for a local shooting range came around.
“Now, it is a reality.”

Gun ranges or clubs need to be approved by the Chief Provincial Firearms Officer before they can open. In Alberta, you would have to adhere to the RCMP Range Construction guidelines, which contains the construction specifications for shooting ranges.

“Those guidelines take into consideration factors for safety, that each shooting range has to meet in order to become approved,” said Derrick Krizsan, CAO for the M.D, saying they had submitted the claims for both the Taber Shooting Foundation as a club and for the 100-metre shooting range in 2014, saying they had met the guidelines.“The shooting club was approved, and the 100-metre was approved, and then we received notification earlier this week that the 50-metre, 200-metre and 600-metre ranges have been fully approved by Alberta’s Chief Provincial Firearms Officer. All of those ranges are now certified to be open.”

Certification was received on Wednesday, April 13 for the 600-metre, 200-metre and 50-metre ranges.

The application for the action range’s certification has been sent out, since it was only just built, but it is expected to be approved in mid-May.

No certification is required for the archery range, although the M.D. staff has worked closely with local archery groups in designing it.

“(The ranges are) open and for use. If there’s workers there, that certain range will be closed, if there’s people on there working,” said Elfring, with the exception of the action range. “But if there’s nobody working there, it’s open and ready to go.”

Construction had started on the complex in November 2014. Although crews only worked on the range until regular construction season started, leading to a delay in the opening date, the 100-metre range was open for shooting enthusiasts to take aim in July 2015.

Work is proceeding currently on the shelter for the 50-metre range. Once construction is completed on all of the different ranges, work will begin on the donated clubhouse, which will house designation rooms for each of the different shooting disciplines, and an indoor archery range in the basement, for operation during the winter months.