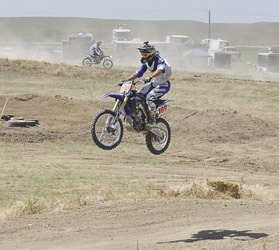 The Taber Motocross Park will be having a new look to it thanks to the blessing of the Taber Recreation Board and Taber town council in expanding it to have an endurocross track expansion.

Ryan Kultgen, president of the Taber Motorcycle Association and Jeremy Kramer, vice president, were on hand at the Taber Recreation Board March meeting to outline the association’s intent to amend the current lease of the facility to allow for the expansion.

“We want to diversify the whole area to change the driving scopes, and bring in a couple of different options who ride bikes, but don’t do motocross, but ride in the coulees and things like that,” said Kramer. “Areas like that are getting harder for people to access, so this would give them another option.”

Endurocross is a hybrid motorcycle competition, a mix of supercross, trials, and enduro racing held indoors over obstacles resembling a trials track.

“We will be looking to build a endurocross track with a mix of rocks and logs and different obstacles to go over instead of just jumps and corners like your basic motocross track,” said Kramer.

According to the delegation, there are endurocross tracks across Alberta, including Brooks and Calgary, that are being used as a new way to attract attention to the sport.

“There are a lot of people who are afraid (with motocross). Parents are nervous seeing guys go out there and do big jumps sailing through the air,” said Kultgen. “Something like this, it’s a little less extreme and hopefully we can attract a few more young people to the club. It (endurocross) teaches balance, and controlling your bike with your body. It’s a lot slower speed with more technical riding. It rounds the rider out.”

Kultgen added the local association is sitting at around 85 members, of that approximately 10 compete in races.

“With this (expansion), I think we will boost our numbers. When we started the club, we had 250 members in the club. I’ve raced motocross for 25 years and I’d be at races where there were 100 (local) people at the race,” said Kultgen.“It works in cycles. Obviously with the economy, people don’t have the money to travel to races, it’s tough. We’ve been running the track the last couple of years as a bare-bones facility because the guys that race are the guys that volunteer. The guys that just ride don’t care if the track is watered or groomed. The guys that race want a perfect track. Our number of racers show our number of volunteers, and we don’t have a lot of volunteers. Maybe this expansion will help with that by bringing in more people with a different style of riding.”

M.D. of Taber councillor and recreation board member Merrill Harris inquired about the costs that would be required to upgrade the motocross park to add on the endurocross expansion.

“Basically all the work that is going to be done will be volunteer work. We’ve got quite a bit of supplies and volunteers that are willing to help,” said Kultgen. “The main part of our revenue comes from our day passes, and at the start of our season one day I was hearing we had 25, 30 people out there already. All spring we get large numbers to ride, and I think the expansion will increase our day passes as well.”

Taber town council passed the motion unanimously at its March 14 meeting to approve the Taber Motorcycle Association Endurocross Track Expansion Project with the intent to improve the current leased lands at NE 1/4 of 26-10-17W4M. The motocross park is located on Highway 864, north of Taber.

“You don’t have to race to enjoy this facility. What I think they are planning on doing here is an awesome thing. It will give an opportunity for a lot more people to enjoy the track and get on board,” said Randy Sparks, a town councillor and recreation board member at the recreation board’s March meeting.

“I think if you build this, your numbers will increase.”