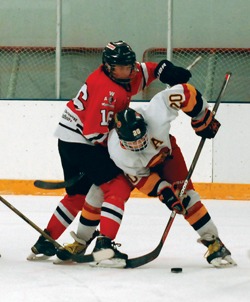 In a game featuring numerous intriguing subplots, the Taber bantam “AA” Golden Suns battled hard in the championship final of Hockey Alberta “AA” Bantam Hockey Provincial Championships, but ended up taking silver in a 5-4 overtime loss to the Beaumont Braves.

“I don’t think anyone expected the number three and four (seeds) upsetting the one and two seeds in the playoffs to even get to the championship,” said Geoff Oster, head coach of the Taber bantam “AA” Golden Suns. “That just goes to show how even the teams were and anything can happen in short-term competition. With short-term competition, it’s about whoever is riding the hot hand. You are riding a wave where you’re riding the good and you ride the bad and when you are good you’re good, and when you’re bad, you’re bad.”

The Suns were scorching to begin its championship final on Sunday at the Taber Arena, where it may have looked like deja vu from its 9-1 semifinal thrashing of the Calgary Rangers, as the Suns raced out to a 3-0 lead a mere 8:37 in the first period.

Kole Fujita scored the first two Suns tallies on ferocious forechecking in the offensive zone that led to Braves turnovers. The third goal was tallied by Derrien Tonin who potted it top shelf after a breakaway from a near mid-ice turnover.

Of those waves that Oster spoke of earlier, they were definitely featured in the championship game as it was the Braves that responded back after the first 12 minutes of dominance by the Suns by chipping away to 3-2 after one period, as the Braves got its second goal with 1:17 left in the first period on the power play. The Suns would struggle with penalties, having seven called to Beaumont’s two.

“We definitely came out strong where we had the momentum. We put them back on their heels, but the momentum changed for them when they changed their goaltedner and settled down,” said Oster. “When they changed their goalie, we still had a bit of momentum and we still got some looks that we were looking for with chances at the doorstep, but we just didn’t capitalize. We hit the post on the power play, if we scored then or on one of the scrums that was in front of the net and broken the seal on the new goalie and not given them any hope by getting a couple more in that first period.”

Instead, it was the Braves that were building the momentum where they won the territorial battle in the second period, badly outshooting the Suns in the process. But goaltender Brayden Peters stood tall, as the Suns extended its lead to 4-2 with a goal by Ryden Rempel with 1:48 left in the second period.

“Peters earned that spot in the game and our other goaltedner, Owen Meyer won us a big game against St. Albert to get us into the playoffs. At the end of the day, our goaltending was not the weakest part of our team,” said Oster.

The Braves would continue to chip away in the third period, with the goal that evened things up coming off the power play at the 9:20 mark of the third period. Both teams had furious scrambles in front of the net in the dying minutes to put the game away for their respective teams. Nevertheless, the Braves did just that on a tough pinch by a Suns defenceman that caused a breakaway going the other way.

“The kids are disappointed with the outcome of the final, but they are happy that they are able to achieve something so special (a provincial silver medal) together,” said Oster.

Oster noted his team had handled adversity in the past quite well prior to provincials and faced it at the start of the tournament on Thursday as well. The team suffered a 4-2 loss to Wheatland Warriors on Thursday before muddling its way to a 2-2 draw and a 5-2 loss to Beaumont and Calgary on Friday which put the Suns in real danger of not even making the playoff round. But the team bounced back nicely to earn a 4-3 win over St. Albert Bears to clinch a spot in playoffs in the must-win game.

“Our team built our momentum from the beginning of the tournament to the end. This was a special group of kids that bought in from start to finish with whatever we were selling,” said Oster. “We told the kids that for this weekend, you are not playing for mom and dads or anybody else. You earned the right to be here, you laid the groundwork and this weekend is for you and so be there and play for each other. They are a tight-knit group of kids, and are very proud of them.”

Oster has traveled all over the province and Western Canada for that part attending tournaments over the years, and he tipped his hat to the parents and volunteers of 2016 bantam “AA” provincials in Taber.

“From a host-team perspective, it’s the best tournament I’ve been at in a long time. I’ve been at the Mac’s (AAA), I’ve been at three Alberta Cups and this ranks right up there in the quality of tournament that they have,” said Oster. “My hat is off to them, it was a lot of hard work.”