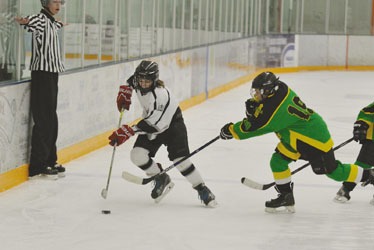 Thursday’s tilt in Taber saw the Oil Kings skate to a 6-4 win.

Oil Kings finished things off with a 4-1 road win on Saturday in Crowsnest Pass.

Span and Ainsley Duell each had a goal and an assist. Kramer and Coutts each scored a goal. Owen Ruggles, Makarchuk, Holland, Friesen, and Rabusic recorded assists.

NOVICE: Taber novice Oil Kings will have its deciding championship game this Sunday at the Taber Arena after splitting its first two games with Irvine Bulldogs.

The first was an 8-7 loss on the road on Saturday.

Nathan Planger scored four times for the Oil Kings who got two goals from Chase Stronge and a single from Ayden Umbach.

The Oil Kings won a nail biter of a second game at home on Sunday as the team beat the Bulldogs 10-9 in sudden-death overtime.

Planger and Stronge each had hat tricks. Damian Beswick, and Kayden Kress each tallied twice.

The two teams square off in the deciding game at 1:30 p.m. on Sunday at the Taber Arena.

PEEWEE: Taber peewee Oil Kings are off to its league finals after sweeping Okotoks in two straight games.

Carter Hendricks had two goals. Byron Kress had a goal and an assist. Ty Fitch and Jack Murphy rounded out the goal scoring. Michael Stronge had two assists and Carson Komery, Logan Kromm, Darci Wright and Talen Damberger has assists.