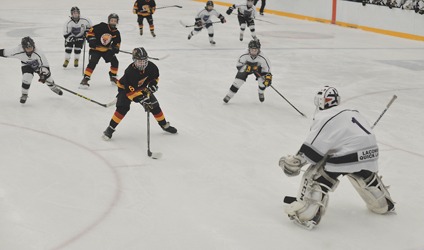 The Golden Suns won 3-2 against Red Deer Parkland (6-22-4) on the road on Saturday afternoon.

Rylen Roersma, Carson Haynes and Carson Cleland scored for the Suns. Nolan Price assisted on all three goals with Roersma also getting an assist.

Brenden Olson got the win in net, facing 19 shots on goal.

The team returned home to the Taber Arena on Sunday and dropped a 5-3 decision to Central Selects (11-17-4).

Roersma, Price and Nathan Verloop each had a goal and an assist apiece. Haynes also drew an assist.

Olson took the loss in net, facing 25 shots on goal.

Taber peewee “AA” Golden Suns end off its SCAHL regular season on Sunday with a game against Lethbridge Hurricanes Red at 1 p.m. at the Taber Arena.

Taber bantam “AA” Golden suns currently sit in second place in the South Division with 48 points, but third-place Cranbrook Hornets are two points behind with three games in hand for this upcoming weekend.

Playoffs begin the March 3-6 weekend, but Taber bantam “AA” Golden Suns are assured a trip to provincials, being hosts to the tournament March 17-20.

Affiliated player James Halverson was called up from bantam and notched a goal with Brock Palmer also getting a single to go with three assists. Logan Wiebe, Clay Nevil and Hunter Johnson each had two assists each.

Taber midget “AA” Golden Suns conclude its SCAHL regular season on Saturday night with a game against Medicine Hat Hounds at the Taber Arena at 8 p.m.