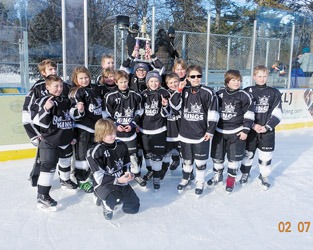 Taber atom ‘A’ Oil Kings went undefeated at a unique tournament in Kalispell.

Kalispell is one of the few outdoor rinks found in Montana and has affectionately become known as the “Snow Globe Rink.”

The following was an excerpt taken from tournament organizers about the uniqueness of the tournament: “Playing hockey outdoors has a special feel, fresh air, stars, sun, snow — it is exhilarating! It can also be a challenge, so please be advised that weather conditions do affect the rink and ice. Glass surroundings may become frosty (particularly in the morning), snow on the ice slows the puck, ice texture changes with weather conditions, the sun can be bright reflecting off the ice — the elements become a part of the game, equal for all participants.”

Evan Koizumi scored a hat trick for the Oil Kings and Devan Loewen potted two goals. Hunter Damburger and Callie McCulloch also had goals throughout the tournament weekend. MVP / Heart and Hustle awards were given to: