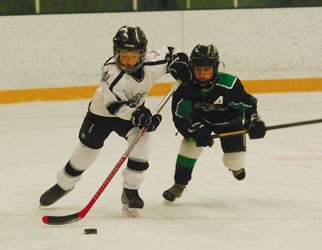 Taber atom ‘A’ Oil Kings hockey team have had a busy week of minor hockey play.

In league play, the team proved road warriors with a 10-4 win in Airdrie and a 6-6 tie in Beiseker.

Hansen and Duell both recorded two goals apiece in the tie against Bieseker. Gensorek had a goal and an assist and Skiba rounded out the goal scoring with a single. Eldridge and Blasseti both had two assists with Devan Loewen recording a single helper.

The team also competed in provincial playdowns last Thursday in a two-game series with goal differential.

The squad dropped a tight 10-9 competitive game against Coaldale at the Taber Arena.

Chase Stronge had seven goals and four assists combined in the two games.

INITIATION: Taber initiation 1 Oil Kings skated to a 14-6 win over Picture Butte on the road on Saturday.

Taber initiation 2 Oil Kings earned a 16-3 win over Magrath on Saturday at the Taber Arena.