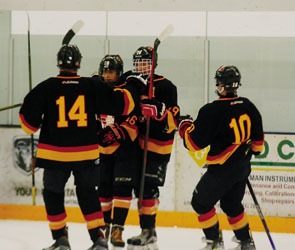 Taber bantam “AA” Golden Suns (18-6-5) got plenty of momentum heading into February in South Central Alberta Hockey league competition, taking five out of a possible six points over the weekend.

The squad started off by skating to a 3-3 tie with Foothills Bisons (4-20-3) on the road on Friday evening, with all three Bisons goals coming via power play.

Owen Meyer had the tie in net, facing 12 shots.

Taber bantam “AA” Golden Suns continued on to bottle up the Airdrie Lightning (6-20-2) 5-1 on the road on Saturday.

Kole Fujita, Blake Kondor, McCulloch and Derrien Tonin scored for the Suns. McCulloch and Sande both also had two assists with Hauck and Fujita getting single helpers.

The team returned home on Sunday afternoon to beat the Bisons 6-2 at the Taber Arena.

Sande recorded two goals and an assist in the win. Fujita, Derrien Tonin, Tristan Miller and Hughson had singles. Honess helped out with three assists and James Halverson, Hauck, Kondor, and Ryden Remple had single assists.

Meyer earned the win in net, facing 15 shots on goal.

Chase Gedny tallied twice and Brant Mack had a goal and an assist. Brandon Langridge had two assists and Justin Astalos had a single helper.

Broc Merkl got the tie in net, facing 25 shots on goal.

Brenden Olson faced 45 shots on goal in the loss in net.

Taber peewee “AA” Golden Suns are on the road on Friday against Wheatland Braves before returning home on Sunday to take on the Braves in the home-and-home series with a 1 p.m. game at the Taber Arena.