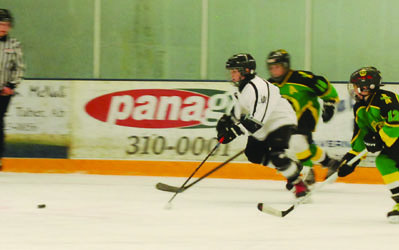 Taber Novice 2 Oil Kings skated to a 12-9 win over Picture Butte Blades at the Taber Arena on Saturday in minor hockey play.

Taber Initiation 1 Oil Kings were also victorious in a 19-5 win over Coaldale at home.

Jenner Workman, Jackson Jones, and Eastynn Pidborochynski each served one period in net.

ATOM: Taber Atom ‘A’ Oil Kings doubled up Lethbridge 12-6 at the Taber Arena.

Kade Duell had four goals and four assists. Matteo Blassetti notched two goals. Heath Hansen and Kyler Marchuk both recorded one goal and two assists. Matthew Gensorek, Connor Eldridge and Connor Chapman each had one goal and one assist. Walker Skiba had a goal and Callie McCulloch recorded an assist.

Taber Atom ‘B’ Oil Kings split its pair of hockey games over the weekend.

The team fell 12-3 to Raymond, on the road on Saturday.

Jayden Holland tallied twice for the Oil Kings who got a single from Hayden Span. Ainsley Duell drew an assist.

The team returned home on Sunday to beat Kainai 8-6.