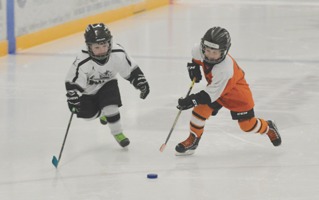 Taber Initiation 1 Oil Kings had a record of 2-1 as Taber hosted an initiation hockey tournament this past weekend.

Every player had a hat trick with Nate Kramer scoring his first goal of the season.

Taber Initiation 1 Oil kings finished off with a 14-5 loss to Okotoks Flyers.

Hansen had two goals and Kramer, Koizumi and Duell had singles.

ATOM: Taber Atom ‘A’ Oil Kings lost 9-5 to Okotoks over the weekend.

Matteo Blasseti had two assists and Walker Skiba and Duell had single helpers.

Atom ‘B’ Oil Kings were also in hockey action over the weekend, beating Kainai 11-6 on the road on Saturday.