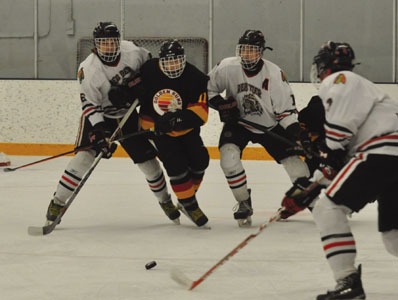 Brant Mack had a goal and an assist in the loss. Brandon Langridge and Linden Gouw also scored. Brock Palmer registered an assist.

Seth Graham faced 31 shots on goal in the loss for the Suns.

The team managed to bounce back with a 3-1 win over the South-Division leading Wheatland Chiefs (12-6-3) on the road on Sunday evening.

Logan Middleton tallied twice for the Suns who got a single from Logan Wiebe. Palmer managed assists on all three Suns goals with single helpers from Ace Wenbourne, Mack and Kaleb Many Fingers.

Broc Merkl was solid in net, facing 41 shots on goal for the win.

Taber midget “AA” Golden Suns are on the road this weekend with a Friday night game against the Lethbridge Hurricanes and a Saturday evening game against Foothills Bisons.

Owen Meyer and Brayden Peters shared goaltending duties in the tie, facing a total of 23 shots together.

Taber bantam “AA” Golden Suns are at home this weekend with a Friday game against Okotoks Oilers at 8:30 p.m. at the Taber Arena.

The team then battles Red Deer Ramada on Saturday at 5:30 p.m. at the Taber Arena.

Olson was peppered with 49 shots on goal in the loss.

This weekend, Taber peewee “AA” Golden Suns start off on the road on Saturday against the Bow Valley Timberwolves before returning home on Sunday for a game against Red Deer at 1 p.m. at the Taber Arena.