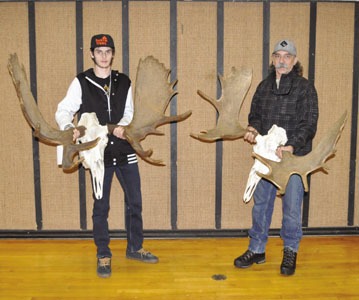 Taber Fish and Game (TFG) Association had another successful Measuring Day at the Taber Community Centre Auditorium on Saturday.

“Entries were up this year, we had over 100 entries,” said Dave Chontosh, vice president and treasurer for the Taber Fish and Game Association. “And we had over 150 people come in through the doors to take in the event.”

John Stanek took home the honour of the Sorgard Memorial -All-Around Sportsman of the Year.

TFG Most Impressive Head belonged to Jamie O’Connor with a whitetail at 169.5.

Ladies Big Game Hunter of the Year honours were issued to Darcy Dubitz.

Leismeister was also given the title of TFG Junior Bowhunter of the Year.

TFG Junior Female Big Game Hunter of the Year was a shared title between Makenna Leismeister and Jordan Jensen.

Rylee May was anointed TFG Junior Bird Hunter of the Year.

The catch of the day for the Victoria Day Weekend was Carrie Lyczewski for biggest fish with a 6.5 pound pike.

The following are the youth results:

The following are the adult results:

“On the whitetail end, numbers were still definitely down in the south, but surprisingly there was still some really nice mature size whitetails that are showing up,” said Chontosh of trends this hunting season. “On the mule deer side, they seem to be fairly healthy. There’s also opportunities to hunt moose, more so on the prairies. Guys who went out on the prairies were pretty successful in getting mature bulls on this first year they opened it up around Cypress.”

The Taber Pheasant Festival helped with overall numbers of the bird in the province.

“We had a lot of pheasant entries, and that’s a bit of a trickle down effect from the pheasant festival where our bird numbers have been healthier than they have been in the past,” said Chontosh adding entries were down in the fish category. “A lot of fishermen are catching and releasing now and so in the future we are planning on having a system where they record their catch and still release it. Snap a photo against a ruler or a weigh scale.”

Next up for the Taber Fish and Game Association is the family fun fishing day in February in which the organization is looking for volunteers. People wanting to volunteer can call Chontosh at 403-317-0623.