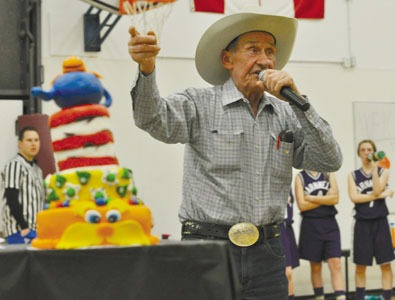 It will literally be a bitter-sweet moment for Barnwell athletics on Jan. 14.

That will be the day Barnwell School holds its annual Cake Auction/Basketball extravaganza for the last time in its current gymnasium.

Scheduled for modernization, the cake auction intertwined with basketball games makes it one of the most unique sporting events in the province.

“I’m blessed to teach in this school which has a lot of community support. This event has captured that support from a lot of different people,” said Aaron Edlund, vice principal at Barnwell School. “It has become an event that has gone way past ‘hey, there’s a basketball game’ at the school. All the kids want to come because the concession is open and all the adults and seniors want to come to see the cakes. Every time those cakes come through the door it’s a big surprise. It’s a amazing what different people can come up with in their creativity, it’s snowballed over the years.”

The competitiveness in flour, eggs and cake mix can be just as fierce as spectators see on the hardcourt as baking skills are matched with hoop skills in who wins at the final buzzer of bids on the cakes.

“Everyone wants to outdo everyone else. Everybody would be proud if their cake went for the highest bid. The dollar figures have changed, where it used to be the highest cake went for $300 to last year it was $1,500 for one cake,” said Edlund.

Edlund noted Barnwell School is very passionate about its athletics, so much so that it prides itself on giving every child the opportunity to participate by keeping its fees low.

“Our athletic fees for the kids to play a sport are $35. From my research in Alberta, that is significantly less. We like to keep those fees down and the cake auction helps with that and we have other things like bussing to cross country and track meets which costs for the kids is zero,” said Edlund.

Construction for the new gymnasium and modernized school will begin shortly, as the tender officially closes on the day of the cake auction on Jan. 14.

The current gymnasium certainly has its shortcomings in awkward and limited seating and pillars blocking sight lines, but it also had its charm, packed to capacity and a feel for, once penned at the Lethbridge Herald, ‘small-town Indiana basketball can be found in Barnwell.’

“My only worry is you saw that theme in the ballparks in the 90s’ where they built them gigantic and they had no character and it wasn’t fun and exciting because there’s 30,000 empty seats. Then in the 2000s they switched and they built them smaller and it was more fun to go to because they were packed,” said Edlund. “I’m a little nervous about that, because right now there is that sort of small-town Indiana mystique feel in the atmosphere we roll out now. I don’t know if you’ll smell the sweat as well in our new gym,” continued Edlund with a chuckle. There will be a lot of people a little sad to see the nostalgia of the old gym end. There before I’ve been here, there’s been a lot of kids that have played basketball in that gym and that’s their home court, and it won’t be anymore.”

Edlund is happy to announce W.R. Myers has returned as the school’s opponent for the basketball games at the cake auction, after a brief hiatus.

“That type of atmosphere is something kids don’t get to experience very often at that age. They can see how they stack up as they put themselves out there. Sometimes they do good, sometimes they do bad, but it’s character building and we want to share that with our feeder school,” said Edlund. “We had Gilbert Paterson in there last year and they were really sad that they couldn’t come back this year. They loved it and raved about it.”

It will be a challenge for Barnwell to continue its athletic programs while construction at the school is ongoing. A rough time line for the completion of the new gymnasium and the modernization of Barnwell School has 18 months attached do to it, bringing it to the fall of 2017.

“Barnwell has literally put their money where their mouth is, they have stepped up. I don’t know if my numbers are 100 per cent right, but we were to gain an extra 300 square metres thanks to the community,” said Edlund. “Right now I have 30 groups of people who want to use the gym and I have to tell them yay or nay or from 9:30-11 p.m. which they say no. So now we have doubled the capacity of the new gym and so the community can get in there and use it. We will have a curtain in there (to divide the space) where I’ll be able to get through my practices and games by 6:30 p.m. and then the community can use it after that.”

After construction begins, up until fall 2017, Barnwell School will be holding its athletics at Central School.

“It will be a bit of a labour on parents commuting their kids, but the fact of the matter is, in a year or two, they will have to do that anyway, because their kids will be playing at Myers,” said Edlund. “This just makes it a year or two earlier.”

The cake auction/basketball games on Jan. 14 will kick off with the Barnwell Trojans girls game at 5 p.m. with the boys Trojans game at 7 p.m., with the cake auction going on during breaks between the games.