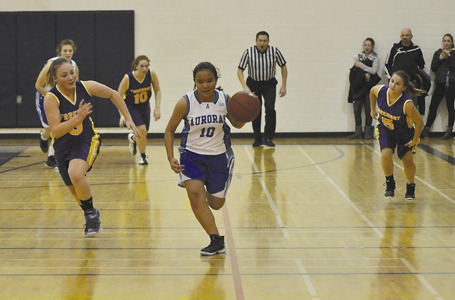 It is a young team growing into itself as the St. Mary’s Auroras girls basketball team prepares to host its home invitational tournament in the New Year on Jan. 8-9.

“It is quite a young team with only two Grade 12s,” said AJ Bergenhenengouwen, head coach of the St. Mary’s Auroras girls basketball team. “With nine players, we have a smaller number of players. But the last couple of weeks, we have improved significantly and the girls have worked very hard.”

As the Auroras continue to play in River Ridge play and try an make their mark in 2A play, Bergenhenengouwen sees his team’s strength in the paint.

“I think our low-post strength will be our strength,” said Bergenhenengouwen. “We are looking for improvement every single day and looking to build up the program again with interest which is my goal as the years go by.”

Along with hosting its home tournament on the Jan. 8 weekend, the team travels to Vauxhall to battle the Queens at 6 p.m.