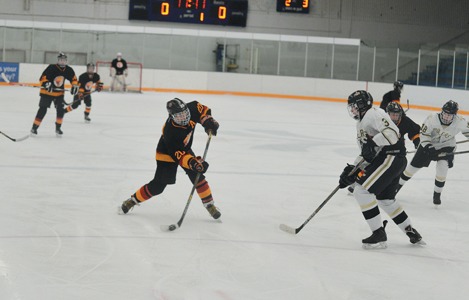 Taber bantam “AA” Golden Suns (13-5-3) skated to a 3-3 draw against the Okotoks Oilers (13-4-3) in South Central Alberta Hockey League play at the Taber Arena on Friday night, as the top two teams in the South Division squared off.

Owen Meyer earned the single point in net, facing 26 shots on goal for the Golden Suns.

Taber bantam “AA” Golden Suns start the New Year on the road in SCAHL play with a Jan. 2 game against the Medicine Hat Hounds.

Chase Gedny and Clay Nevil each had a goal and an assist in the win. Brandon Langridge and Hunter Johnson also scored. Brock Palmer drew three assists and Kaden Fujita and Ace Wenbourne each had single helpers.

Taber midget “AA” Golden Suns start off the New Year slate at home with a Jan. 2 game against the Red Deer Indy at the Taber Arena at 8 p.m. The team then hits the road on Jan. 3 with a game against Wheatland Chiefs.

Nolan Price had two goals and an assist. Carson Haynes, Rylen Roersma and Wyatt Broderson each had a goal and an assist. Dylan Granson and Nathan Verloop scored singles. Gerret Harty, Braeden Sheppard, Carter Deboer and Kaden Walburger each had single assists. Brenden Olson earned the win in net, facing 30 shots on goal.

The team was then edged 6-5 by the Medicine Hat Hounds (13-1-3) on Sunday at the Taber Arena, surrendering the deciding goal shorthanded with a minute left in the game.

Price had the hat trick and Roersma and Walburger had singles.

Taber peewee “AA” Golden Suns start the New Year in SCAHL play on the road with a Jan. 2 tilt against the Medicine Hat Hounds. The team then returns home on Jan. 3 against the Wheatland Braves at 1 p.m. at the Taber Arena.