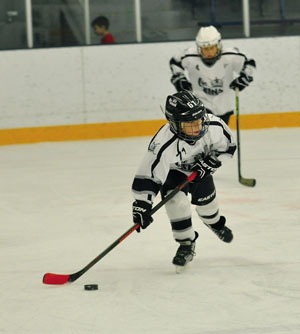 Taber atom ‘B’ Oil Kings earned the gold medal at a tournament in Crowsnest pass this weekend.

The Oil Kings edged host Crowsnest Pass 3-2 in the championship game. Ainsley Duell, Jaxson Coutts and Ashton Lukacs all tallied for the Oil Kings who got an assist from Hayden Span.
Alex Makarchuk earned the win in net.

The tournament featured a 7-6 loss against Fernie and a 17-9 win against Okotoks.

Coutts, Lukacs, Evan Rabusic, Carson Love, Jayden Holland, Evan Friesen, Span, Makarchuk and Duell all tickled the twine at least once in those two games with Lukacs potting 10 goals over three games. Duell and Erik Grimson also shared goaltending duties along with Makarchuk during the tournament.

Clay Leismeister had a goal and three assists in the win.

Gavin Hoskins had a goal and an assist.

NOVICE: Taber novice 2 Oil Kings skated to a 9-7 victory over Raymond at the Taber Arena on Saturday.